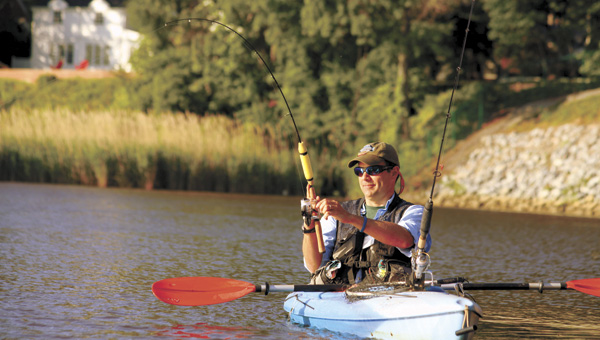 When Dan Babiy went kayak fishing for the first time, for all he knew, he was inventing something entirely new.

He had a love for fishing that went back for many years.

“I grew up fresh-water and salt-water fishing wherever and whenever I could,” Babiy said. “I would throw a lure into a swimming pool as long as no one would stop me.”

Some time ago, he bought kayaks for himself and his wife, and they started paddling around Lake Meade near their home in Riverview. The two pastimes were destined to come together eventually.

“One day I just thought, it would be a lot of fun to throw a rod and a couple lures into the kayak when I went out in it,” he said.

There are national kayak fishing organizations and even a Tidewater Kayak Anglers of America club, but Babiy didn’t know it as he was “discovering” his new sport.

Nevertheless, he learned good lessons quickly, most with good stories to go along with them.

“Never take any more stuff than you’re willing to lose, because you can get tipped,” Babiy said.

Actually, he didn’t have to learn that lesson the hard way, at least not with his own gear and equipment.

“One of my buddies who goes out often with me, he’s just as crazy as I am now, but he spent $100 or more on a bunch of new gear,” Babiy recalled.

A trip off the North Carolina Outer Banks was the first chance to use the new equipment. If the rest of the tale isn’t obvious, the length of the story isn’t.

“He never made it out,” Babiy said. “The first wave capsized him and everything, all of it, went right to the bottom.”

Babiy’s most avid recruit into his hobby is his son, Parke, who graduated from Nansemond-Suffolk Academy in June.

“My son and several of his friends are really into it now,” Babiy said. “It’s definitely the type of activity that’s even better to do with a few friends.”

Dad likes to tell the stories of what his son’s caught more than the ones about what he’s reeled in himself.

Among Parke’s best catches have been a 31-inch drum that was too large to keep and a bowfin that Parke caught on one of his first trips, and before either Parke or his dad knew it was even possible to catch and bring in a bowfin from a kayak.

During the past couple of years, Babiy has learned there’s little limit to what can be caught and where a kayaker can go. In fact, he can get to more spots and more fish in his kayak than other fishermen, he says. He has yet to venture outside of this region, but that still leaves thousands of places to explore.

Many evenings after work or school, the Babiys paddle from Constant’s Wharf onto the Nansemond River.

In the Atlantic, Babiy has been within touching distance of dolphins swimming a couple hundred yards beyond the surf.

“It’s addictive,” he said. “Most of the people I’ve introduced it to have wound up loving it. It’s a totally different way to fish. The first time a huge fish pulls you around, it’s amazing how exciting it is.”

There’s a different strategy involved in kayak fishing than many fisherman are used to, according to Babiy.

Instead of fighting and reeling in a fish, most of the time in a kayak the strategy is to hook the fish and then let it pull the line, the kayak and the angler around until the fish tires. Trying to bring in a four-foot gar, which is about half the length of the kayak, won’t work with sheer muscle and leverage in a narrow kayak.

The mouth of the Nansemond River is one of the best spots to take the kayak and it sports a wide variety of fish, Babiy said — “croaker, drum, striper, blue cats, bowfin, shad.”

Sometimes, even he is surprised by the experiences he can have in his small boat.

Last fall, Babiy was on the Nansemond fishing close to the banks as some anglers on a 27-foot Grady White left one of the docks early in the day. He was still there when the big powerboat returned later in the afternoon.

The guys on the large boat reported no luck for the day. Babiy replied that he had a slow day, too.

Hidden from view of the folks on the other boat was Babiy’s string, which had large stripers on it.

Hampton Roads enjoys an almost uninterrupted kayak fishing season. For the dedicated, kayak fishing is okay in the rain. It’s even fine here in the winter, though there’s always the risk of capsizing in the narrow boat.

“Being dumped in August is one thing,” Babiy said. “In December, you usually choose to stay even closer to shore in case you’re dumped.”

Exercise is a benefit of the hobby, he said, but it’s certainly not his main motivation for going out as often as possible. Occasionally a couple of adult beverages and a couple cigars become part of the necessary gear.

Fishing is, of course, the point, as well as the unique mix of relaxation and excitement — except when something other than fishing is the best story of the day.

He and his party have seen bald eagles circling and swooping on Suffolk’s lakes.

“In a kayak, you’re moving so quietly, you aren’t disturbing the fish, other animals don’t hear you,” he said.

Deer have come right to the edge of a lake or riverbank and a few steps from his kayak before realizing it, and the kayaker, are there. Sunrises and sunsets in Suffolk, on the Chesapeake Bay or on the James are outstanding, as well.

Babiy wants to travel to the Pacific Northwest or Alaska and test his ability there, and even the Great Dismal Swamp offers unexplored territory for his kayak and unfished waters for his rods. All he needs is a little more time.

Suffolk has been named one of the top 100 small cities to live in by Money magazine. Comparing cities across... read more