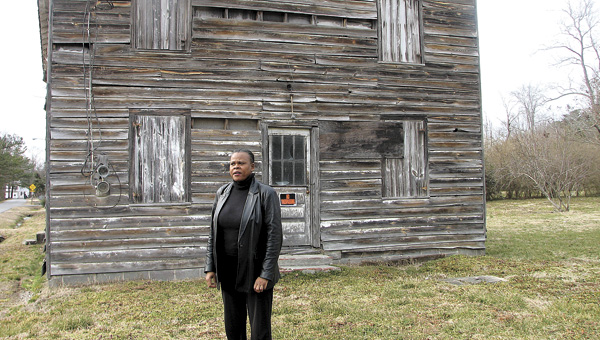 Mary Hill stands in front of the Masonic Lodge in Hobson, one of seven buildings named in a suit asking for an injunction against demolition of the buildings.

A group of Hobson property owners has filed suit against the city and the Suffolk Redevelopment and Housing Authority to prevent the scheduled demolition of several Hobson homes and buildings by the city.

The complaint states that the demolition and acquisition of seven properties in Hobson, originally scheduled for Aug. 31, was “discriminatory” and that the plaintiffs were denied federal funding for “renovation or preservation” of their property.

“Plaintiffs’ complaint, revolve around the discriminatory elements used by the ‘defendants’ that violated their Constitutional ‘civil rights’ under the 14th Amendment,” the suit reads. It further alleges that Hobson homeowners were denied access to federal funds designated for redevelopment and preservation of historical properties.

The suit asked for an injunction to stop the demolition and acquisition.

According to Suffolk’s online assessment records, Mary Hill owns three of the properties — the Masonic Lodge at the corner of Macedonia Avenue and Crittenden Road, as well as the properties at 1765 and 1769 Sawmill Point Road.

Hill did not return calls seeking comment this week.

“This is to determine how these federal funds were acquired and dispersed by the ‘defendants’ and who were the recipients,” the suit says. “The coercion of or use of discrimination in a federally funded program by any entity against a ‘protected class’ is a violation in this case the ‘plaintiffs’ of their civil rights under the U.S.Constitution’s 14th amendment.”

There was no word Friday on when the case would be set.

Call it the 3 R’s of Suffolk’s economic future. Where most people are familiar with the 3 R’s that form... read more