Windsor beats NSA in wild one 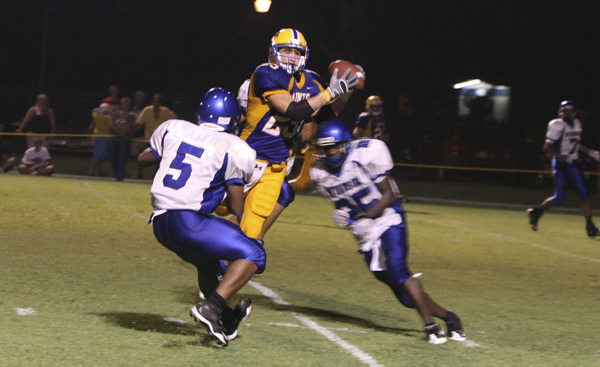 Nansemond-Suffolk’s Bobby Lamm makes a catch an instant before being hit by Windsor’s Jahfar Eure (5) and Mark Fenner. Lamm’s catch saved NSA on a fourth down play in the fourth quarter, but the Dukes hung on for a 20-15 victory Friday at NSA.

Windsor junior R.J. Edwards scored what proved to be the game-winning touchdown and broke up a probable Nansemond-Suffolk touchdown on the final play of the game to lead the Dukes to a 20-15 victory Friday night at Nansemond-Suffolk.

In the third quarter, Edwards took a pitch around the left end and was too fast for the Saint defense in going 78 yards for a touchdown. With a two-point play, the Dukes built their lead to 20-9 at that point.

With seven seconds left and the ball on the Windsor 22, NSA’s Domonique Lennon threw to the middle of the end zone. Edwards cut in and knocked the ball away before it reached a Saint receiver.

It was a wild, even sloppy, game as the first contest of the season for both sides. A pair of lost fumbles, 12 penalties and a number of timeouts wasted to get the correct play or players on the field meant the Saints were hurt more by their own mistakes.

“Just missed assignments,” said NSA head coach Kevin Allen. “We had a lot of confusion on things we work on in practice and go over again and again. We beat ourselves tonight.”

One NSA mistake, a bad snap on a punt to end NSA’s first possession of the game, set up Windsor’s first score. The Dukes were on the board four plays later when Edwards rushed in from two yards out.

A wild punt snap by the Dukes put NSA on the board in the closing seconds of the first quarter. The ball went through the end zone for a safety and a 6-2 Windsor lead.

On the ensuing free kick, NSA took over on the Duke 45. NSA took the lead when Lennon rolled to his left and found Matt Newhall in the corner of the end zone for a 19-yard reception. A successful kick by Lamm made it 9-6 NSA with 8:04 left in the half.

Windsor marched straight down the field to answer. Austin Winkles passed to Aaron Echols for a 25-yard play to the NSA 5. Two plays later, fullback Mark Fenner scored on a 2-yard run.

The Saints should have been tied or ahead at the half. A long NSA drive reached 3rd-and-goal at the 9 when Lennon threw an incomplete pass and was hit late.

The Saint sideline thought the penalty gave them a first down with 0:35 remaining, but the call was a dead ball foul, hence the down counted and it was actually fourth down.

The Saints ran what they thought was a first-down play instead of kicking a field goal or running a play better suited to 4th-and-5. Lennon was stopped on a run, turning the ball over to Windsor.

Edwards’ big run came on the first snap of Windsor’s second possession of the second half and the Dukes kept their two-possession lead until midway through the fourth period.

David Gough’s sack and forced fumble and Zachary Wayland’s recovery gave the Saints the ball on the Windsor 29 with 8:00 to play.

NSA needed a 17-yard Lennon to Lamm reception on a 4th-and-13 to keep the ball and a few plays later, Jack Russell scored on a 2-yard carry. Windsor stopped the two-point try, leaving NSA needing another touchdown.

NSA’s defense forced a punt and the Saints started their last drive on its own 41 with 1:42 left.

After a Saint penalty and Windsor sack put NSA in 3rd-and-20, Lennon scrambled from one side of the field to the other, breaking a few tackles along the way, for a 25-yard gain. On the next snap, Lennon raced 25 yards again. An injury to Windsor’s Michael Jackson stopped the clock with 0:10 left.

Lennon, who had been battling cramps throughout the second half, received treatment during the stoppage, meaning he had to come out for the next play.

Jackson suffered a neck or head injury and needed a brace before being taken off the field on a stretcher.

After the delay, NSA spiked the ball, stopping the clock with 0:07 left. Lennon came back on, but after running around the backfield and eluding Duke tacklers, his pass found Windsor’s Edwards.

Lennon was 9-for-17 passing for 105 yards and he rushed for 66 yards. Ryan May rushed for 59 yards. Russell and Ryan Serianni made four tackles for losses each.

“I saw a lot of fight, guys that never gave up,” Allen said. “We made too many mental mistakes. Other than that, we’re getting there though.”