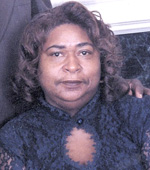 The funeral service will be held on Monday, Sept. 6, 2010 at 2 pm. at Palm Tree Baptist Church, officiated by the Rev. Anthony Sommerville. She will be laid to rest in the Boothe Family Cemetery in Gates, N.C. Crocker Funeral Home, Inc. is handling the arrangements. Condolences may be extended to the family at www.crockerfuneralhome.com.