From shelter dog to community dog 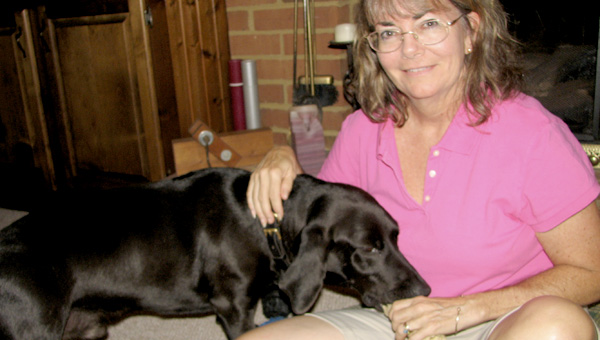 Adopting Rupert: Margaret Little adopted Rupert at the Mutt Strut in 2008. At the time, he was so malnourished she could count each of his vertebrae. Now, he is loved as the neighborhood dog.

After their dog of 15 years passed away, Suffolk residents Tim and Margaret Little weren’t sure if they would adopt again. All that changed after visiting the 2008 Suffolk Mutt Strut on their anniversary.

“We went without any intent on getting a dog,” Margaret Little said. “There were all these dogs leaping and pulling and so excited with everything going on around them, and we knew if we were going to get a dog, he’d have to be more relaxed. Someone told us we needed to find ‘Pancho,’ as they called him.”

They found the basset hound-lab mix sitting with a volunteer lying in the shade underneath the stage.

“I sat down and had a Chihuahua on my right and he was on my left, and he just started slithering across my lap very slowly to come say sweetly ‘hi’ to the Chihuahua,” Margaret Little said.

Eventually, she found herself with all 40 pounds of the hound stretched across her lap, and as soon as her husband came over, the dog turned on the charm.

“He knows how to get adopted,” Little said. “He went right over [to my husband] and just starting kissing him. We left without him that day, but the next day, I got an email from my husband with a subject line that said ‘Thought about Pancho any?’”

The couple visited the dog at the Suffolk Animal Control, where he had been staying for a few months after being picked up as a stray.

After walking around the outside gated area with him for a while, when they went to take him back in, “it took all three of us to shove him back inside his pen,” Little said. “He was bracing himself against the door with his legs. I was crying. My husband almost started crying. It was heartbreaking. At that point, we were like ‘where do we sign?’”

About a week later, he came to his new home and got a new life and even a new name — Rupert.

As with any adopted animal, there are unknowns. One of those was his age, which was closer to 1 than to 3, as the folks at the shelter had thought.

“He was just so sick that they couldn’t tell,” Little said. “After we got rid of his worms, upper respiratory infection and got him properly nourished, we realized we had a lab puppy on our hands.”

On the plus side, he was already housebroken.

“He’s our seventh adopted animal, and they always come with unknowns, but if you take the time to work with them, you’ll get your reward,” Little said. “He is just so loving and thankful that we adopted him. They seem to know.”

His days are now filled with dog toys and regular walks and bike rides, a few weekly visits to a doggy daycare, and frequent visits to the Kolesha family down the street.

“He’ll go between our house and theirs to see who is up to something more fun,” Little said. “He’s just so loving and silly. He’s a community dog, really.”

To register and begin collecting pledges for the 2010 Mutt Strut on Sept. 19, call the Suffolk Humane Society at 538-3030 or visit ww.firstgiving.com/suffolkhumanesociety.

A simple gift between schools