When LaMarr Coles, 18, moved to Suffolk in sixth grade he had a hard time fitting in.

“It’s hard to make friends,” Coles said. “I wasn’t anybody’s cousin from up the street and my uncle wasn’t the coach of the basketball team.”

He soon found a place at the Suffolk Boys and Girls Club. 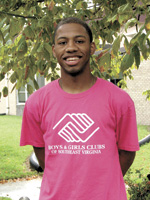 “They accepted me for who I was,” Coles said. “It was hard for me at school, but everyone there embraces you and your hopes and dreams.”

Seven years later, Coles was named the Suffolk Boys and Girls Club’s Youth of the Year. In the spring, he added a regional designation to the title, having been chosen as the top youth among 10 students from region chapters.

“To be named Youth of the Year in our program means a lot of different things,” said Suffolk Boys and Girls Club director Reggie Carter. “They have to demonstrate educational abilities, career development, character development, health and life skills and leadership. They’re champions and leaders amongst their peers. They know what it means to make the right decision. LaMarr does all of that.”

Cole’s family had lived in New York before moving to Chesapeake, where they moved when his Navy father was transferred. After later moving to Suffolk, LaMarr attended John F. Kennedy Middle School and Lakeland High School. He graduated from there in June and is now a freshman at Old Dominion University.

He has been a model of the kind of difference that the Boys and Girls Club hopes to achieve in the lives of its participants.

After getting plugged into the Boys and Girls Club, he began doing chores and “whatever they needed me to do,” Coles said.

As he progressed in his education and maturity, he began his first job at the club.

“When I started working there is one of my favorite memories,” Coles said. “It was my first job and something I knew I would love to do. I wanted to give kids the same opportunity I had.”

He soon found himself working nearly every day of the week at the club while balancing his academics and a spot on the basketball team.

“There were drug dealers, kids getting into trouble, kids just having sex — the club was a safe haven for me,” Coles said. “I didn’t want to be around all that, and being at the club gave me something positive and fun to do. I could let go of the other burdens I was carrying.”

Coles said he is honored to have been named Youth of the Year.

The Suffolk Boys and Girls Club has been in the community for nine years and operates out of John F. Kennedy Middle School.

“I believe that any child that comes here is capable of being a Youth of the Year,” Carter said. “The sky is the limit. There are no barriers here. There is no glass ceiling. Anything you want to achieve you can.”

For more information about the organization, call 934-0349.

From shelter dog to community dog