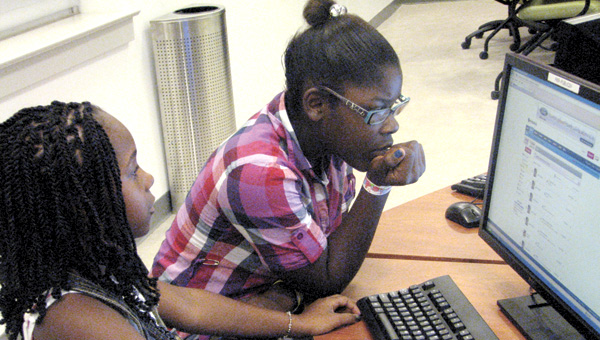 Computer time: Deshenell Hunter and Nikia Skinner spend time on computers at the East Suffolk Recreation Center. More than 100 students were “locked-in” on Friday night at the center, where they played basketball, watched movies and participated in other activities.

There was no shut-eye for anyone at the East Suffolk Recreation Center Friday night.

In the late hours of the night and wee hours of the morning a D.J.’s jams could be heard in the gym, while students played on the basketball courts.

Hanging onto the last days of summer before school starts on Tuesday, Suffolk’s Parks and Recreation Department hosted its second annual Back-to-School Lock-in at the center to keep the students off the street and give them one last hurrah before school starts.

“It’s about prevention,” said Suffolk Parks and Recreation recreation specialist Sparkle Bailey. “We want to keep students off the streets and give them a safe haven. This lets them come in and see what kind of fun we have at the community center.”

The event began at 9 p.m. and went through 6 a.m. Saturday morning. More than 100 students, ages 11-16, were in attendance, with more filtering in throughout the night.

Wilson brought his brother with him and said he’d be spending his time playing table tennis.

There were optional sleeping areas for those who couldn’t stay up all night.

Last year, the event attracted 90 students, a few of whom returned this year.

“It was fun last year,” said Deandre Demiel, 15. “I came because there are other things to do than be out on the street.”

Deandre plays for a high school basketball team and was going to use the time to brush up for the school year.

With the start of school just around the corner, Friday was one of the last all-nighters he planned to pull for a while.