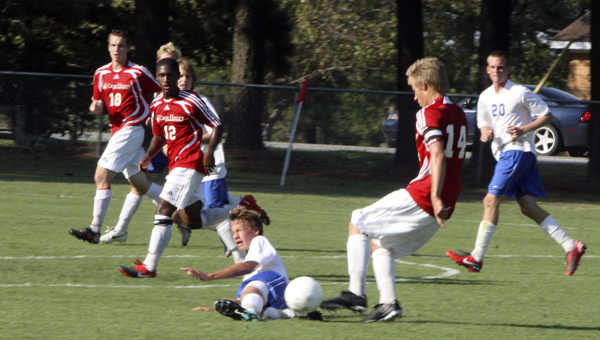 Andrew Giermak/Suffolk News-Herald Sliding block: Nansemond-Suffolk freshman Preston Firnstahl slides to block a pass by a Cape Henry player Tuesday at NSA. Firnstahl scored the only Saint goal as the Dolphins went on to a 7-1 win.

Cape Henry scored two goals in the first six minutes and three goals in the final seven minutes to ruin Nansemond-Suffolk’s home-opening match of its boys soccer season with a 7-1 win.

The middle 65 or so minutes of the contest were largely in favor of the visiting Dolphins, but nowhere near to the degree the final score suggests.

“We’re still maturing and we have to learn not everything’s going to go right in a match,” said NSA head coach Art Truesdell.

“There are going to be bad calls, bad bounces, we’re going to make mistakes. What’s important is how we react to the mistakes we make and not let it distract us from what we’re trying to do,” Truesdell said.

For awhile, the Saints answered adversity well Tuesday after the Dolphins stormed out to a 2-0 lead.

The Saints possessed the ball well for stretches of play. A display of fancy passing, a give-and-go between midfielders Matt Atienza and Tucker Firnstahl , set up NSA’s lone goal. Preston Firnstahl blasted a bouncing ball into the goal from short range after Atienza’s cross into the box created trouble.

Cape Henry regained a two-goal lead in the 33rd minute, but the Saints remained dangerous in attack on a few occasions late in the first half and early in the second half.

A successful Dolphin penalty kick seven minutes after halftime took much of the steam out of the Saints’ effort.

Last Friday afternoon, NSA opened its season with a well-played, hard-fought match, but still a 2-0 loss, at Bishop Sullivan Catholic.

These first two matches, while versus Tidewater Conference rivals, were non-conference contests. Truesdell is fine playing teams that will make his side pay for mistakes or lapses.

“In this league, every game is going to be good competition,” Truesdell said. The Saint schedule has 14 matches against teams that reached the VIS State Tournaments, at one of the three VIS divisions, last season.

“Today, it showed we’ve got to play 80 minutes. We have to play hard and be focused, physically, but even more so mentally,” Truesdell said.

A federal judge has recommended a $12-million settlement in a lawsuit brought by more than 120 claimants against Peanut Corporation... read more