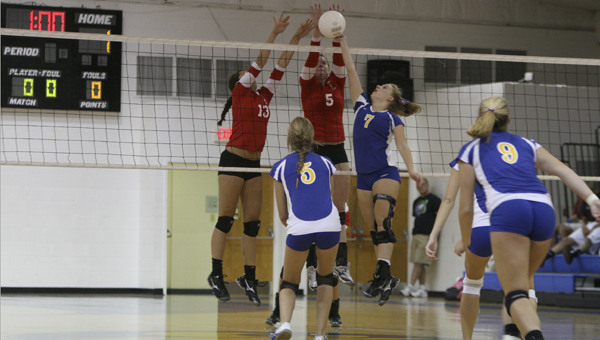 Nansemond-Suffolk’s Kelsie Halberg, blue, tries to save an errant pass from a pair of Cape Henry blockers during a non-Tidewater Conference match at NSA. Cape Henry beat the Lady Saints 25-12, 25-18, 25-20 as NSA opened its season under new head coach Robyn Ross.

Nansemond-Suffolk’s girls volleyball program has consistently been highly-ranked among state private schools for much of the past decade. Last season, the Lady Saints finished up in the state quarterfinals with an 18-8 overall record.

None of that is stopping NSA’s new coach, Robyn Ross, from changing a lot of what the Lady Saints have been used to.

She’s changed up NSA’s defensive system and some of the returning players’ positions.

“I guess that is shaking things up a lot,” Ross said.

Ross played volleyball for four years at the U.S. Air Force Academy and coached there following graduation, explaining some of why she brings a reliance on conditioning, hard work and discipline.

“I expect the same from them (high school players) as I did girls who are playing at the Division I level,” Ross said.

The Lady Saints had a difficult assignment for their opening match of the season and Ross’s debut.

“Of course I’m going to be happier when the W’s on our side, but to have this as our first match, it’s a good gauge of where we are,” Ross said.

The Lady Saints have a good number of returning players back from last season, especially with their hitters. NSA, new coach or not, has to replace four-year starter at setter Mackenzie Westfall.

In the season opener, Quinby Hines and Kelsie Halberg shared the setting job.

Early on, simply passing to Hines or Halberg off of Cape Henry’s big serving was too much of a task. The Lady Dolphins took a sizeable lead early and then ran off 11 straight points late in set one.

Sets two and three were closer although the Lady Dolphins still led all the way.

Late in set two, Tori Dail put down back-to-back kills. After a Cape Henry sideout, Kela Bogaard and Margaret Davies scored blocks on consecutive points. It wasn’t enough to make a difference in the set, but it was a sign the Lady Saints could play their game against a team the caliber of Cape Henry.

After Cape Henry jumped out to a 13-4 lead in set three, NSA fought back to as close as an 18-17 Lady Dolphin lead.

“They seemed to have meshed well with me. There haven’t been any issues,” Ross said. “Everyone’s stepped up to what I’m expecting and there’s been improvement even just in the first couple weeks of practice.”

The Lady Saints jump right into their schedule with a busy first week. NSA plays at Walsingham Thursday evening in a non-conference match. The Lady Saints play in a tournament at North Cross School in Roanoke on Saturday.

Back home: After six days of wandering and a community-wide search effort, Comet has been reunited with his owner, Frances... read more