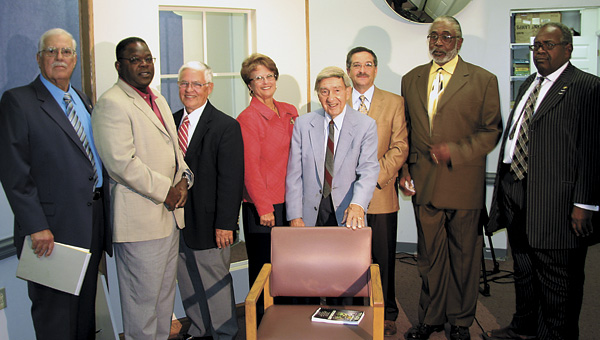 A former mayor gathered all eight of this year’s candidates for City Council for a talk this week.

Andy Damiani produced his “Roundtable Talk” show Wednesday at the Washington Square Mall with the council candidates. Each candidate — two for each of four boroughs up for election — was given about three minutes to state his or her name, contact information, biographical information and reason for running for office.

“This gives an opportunity for people to see and hear the candidates,” Damiani said. “A lot of people don’t know these folks if they were walking down the street.”

Charles Brown, the incumbent in the Cypress borough, was first in the hot seat.

“I have been serving the good people of Suffolk for 16 years,” said Brown, who is seeking his fifth term on the city’s governing body. A teacher at Northrop Grumman’s Apprentice School, Brown is a church deacon and a life member of the NAACP and PTA. “I want to continue to work as a team,” he said. “I’m looking forward to being of service.”

His opponent, Bill Newsome, took the seat across from Damiani next.

“My family roots go back just about 200 years in Suffolk,” said Newsome, who retired from Norfolk Public Schools with more than 30 years in education. “I have some time to do some things that I’ve always wanted to do. I want to serve, because for a number of years, the Cypress borough has been served, but underserved.”

The candidates for the open seat in the Chuckatuck borough were next. The post is being vacated by Councilman Joe Barlow, who is stepping down after more than five years on council.

Duman noted his service on the EDA. “I have enjoyed doing that tremendously,” he said.

Also running for the Chuckatuck seat is Caroline Martin, a former administrator at Obici Hospital. She retired as the chief operating officer of Riverside Regional Medical Center, and serves on the boards of the Western Tidewater Free Clinic and Suffolk Partnership for a Healthy Community.

“I want to give back to Suffolk,” she said during the show taping. “I do think it’s at a crossroads. I want to be part of the solution.”

Jeffrey Gardy, the incumbent in the Holy Neck borough, touted accomplishments since he has been on council.

“We’ve gotten projects done that’s been on the books forever,” said Gardy, who came to Suffolk in 1966 and now practices law with the firm of Johnson, Gardy and Teumer. “We’ve had no tax increase and level funding for the schools.”

His challenger, Jennings B. Varney, began his time in the seat by stressing why he is not running for office.

“I’m not running because I own a lot of land,” said Varney, who has a degree in marketing education from Old Dominion University and served in Vietnam. “I’m running because I like to help people. We need to listen more.”

The candidates for the Suffolk borough were last in the taping room. Charles Parr Sr., a local funeral director, also touted the progress made during his time on council.

“We’ve made great progress,” he said. “We’ve taken a lot of projects that have been 20 years on the table off. I feel that there’s still a few things we need to finish.”

Parr is a member of local funeral director organizations.

His challenger, Alvin E. Copeland, is a retired naval inspector of 31 years and also a former planning commissioner.

“I’m running because I have grown concerned with the decisions that’s being made in our city,” Copeland said. “I think the residents should have a voice again the decision-making. I think we need to give the government back to the people.”