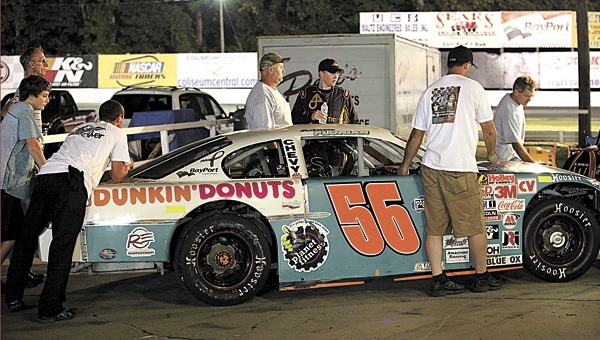 Florian’s drive: Adam Florian, in the black cap and black racing suit, drives the No. 56 Late Model car in Langley Speedway’s Late Model Stock Car division. Florian is a native of Driver and a senior at Nansemond-Suffolk Academy. Florian was promoted from Langley’s UCAR division to its top series during the 2010 season.

Even when Adam Florian isn’t in the driver’s seat himself, he’s still busy with racing.

Florian, a senior at Nansemond-Suffolk and Driver native, was officially off last Saturday at Langley Speedway as his Late Model Stock Car division had capped its 2010 season a week earlier.

“I was at Langley, with one of the Whelen Modified teams, helping out in the pit crew,” Florian said.

Florian’s a veteran, and former season champion, of Arena Racing USA’s Hampton Roads circuit. He might sit the season out this coming winter, at least as a full-time driver, because it’s his senior year of high school.

“I know my brother Landon will be driving in (Arena Racing) so I’ll be there to support and help him,” Adam said.

“I want to spend a little more time hunting with me granddad,” Florian said.

Florian’s earned a bit of an offseason, especially after a hectic season at Langley. Midway through the season, a project about a year in the making took shape as Florian moved from his U-CAR ride to the No. 56 Chevy Impala Dunkin Donuts car in the Late Model Stock Car division, Langley’s top class.

Florian moved into the Late Model division for the last five races of this season.

“We always qualified really well. Then in the races we mostly tried to stay out of the way. We got one top 10 finish. Basically this was a learning year for me,” Florian said.

“Stay out of the way” might sound strange from a racecar driver.

Learning a new car, going up against more experienced drivers and not being involved in the season’s point standings, all meant, while Florian was competing and racing, the last thing he wanted was to wreck a top contender.

“You have to keep the respect of as many drivers as possible. Most people don’t do that and they lose a lot of respect that way,” Florian said.

“Late Models are a lot different,” Florian said. “I’ve never driven anything as big and as heavy.”

“You’ve got to be very smooth with them. I’m taking my time learning it,” he said.

Even with missing the last few races, Florian still ranks No. 6 in the Langley U-CAR season standings. Landon, his younger brother, is 14th in the U-CAR points.

“Everyone at Langley’s very welcoming. Everyone there is great,” Adam said. Regulars at the Speedway include young drivers such as Adam and Landon, as well as long-time racing veterans with experience at Langley and many other tracks around the region.

“It’s a very hard track to drive…Most drivers say, ‘if you can win (at Langley), you can win anywhere,’” Adam said.

“It’s all very competitive. Guys are always on their A-game. There’s no playing around,” Florian said.

Florian deserves a short break since he’s the starting goalkeeper for NSA’s soccer team this fall. He’s also a peer counselor and a member of the National Honor Society.

“It’s non-stop. As soon as school’s done, there’s (soccer) practice, homework, dinner, then go out and work on the car,” Florian said.

His Late Model car is garaged in Hampton, a few minutes from the Speedway. Langley has open practice Thursday nights and drivers can rent track time at other times. Saturday is race day, but there’s a lot to do before simply lining up for the green flag.

“I’m up real early. My mom says I have to help clean the house before going to the track. Then we get to the track around 10:30 or 11,” Florian said.

Florian and his teammates check the car, all of his gear and radios. Drivers practice early in the afternoon. Qualifying is a couple hours before the races under the lights.

“With our first practice, we basically shake the car down and make sure everything’s okay. The second time we go out, then we’re trying to get speed,” Florian said.

Florian’s looking at attending Christopher Newport University with an eye on continuing in the team he joined this season.

“We’re trying to figure out what to do for next year,” Florian said. “I hope to stay close to home and I’d love to continue racing.”