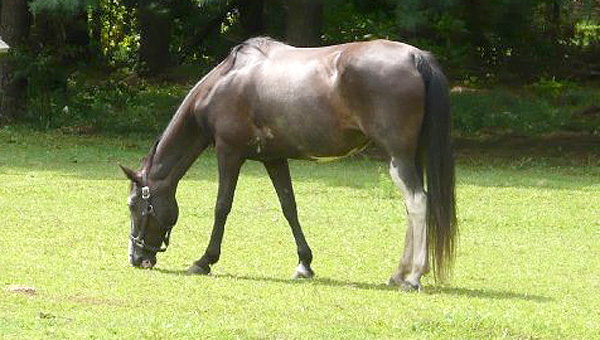 Angel assaulted: Joy Joco’s horse Angel, a 16-year-old Tennessee Walker, was violently and sexually assaulted while Joco and her husband were away from their Babbtown Road home for a few hours on Monday. Police are asking for help finding the assailant.

When Joy Joco and her husband returned from the store to their home in the 100 block of Babbtown Road on Monday, she knew immediately that something was wrong with Angel, her 16-year-old Tennessee Walker.

The horse had been moved from the pen in which she had been left, and when Joco moved closer to Angel, she could see blood on her hindquarters.

But not until the vet arrived soon thereafter did the full horror of Angel’s plight become clear. She had been sexually assaulted while the Jocos were absent.

Police are asking for help finding the person, whom they believe, based on the doctor’s examination, must have used something like a baseball bat to violate the horse.

“I can’t say that I’ve ever seen a case similar to this,” Suffolk spokesperson Debbie George said. “This case is very disturbing.”

According to police reports Joco and her husband were gone from the house from about 3:30 to 6:30 p.m. Monday. A witness told police that he had seen a silver Ford “dually” parked in the family’s driveway while the Jocos were gone. Someone cut through a portion of the fence around the pasture to gain access to Angel.

The Walker was in a pen with another horse and a pony when the couple left home and was in a separate area, suffering from assault-related internal injuries when they returned, Joco said.

In 50 years of owning horses and 36 years of her family owning the property in Suffolk, she has never imagined something like this happening, she said.

“The news needs to be out there, because we have a large horse community,” she added.

Joco’s veterinarian wondered whether she had done something to make an enemy who might retaliate in such a fashion. On Thursday, she said she could not imagine such a possibility.

“I have wracked my brains to think who could have done it,” she said. “No, I don’t have any enemies.”

Things will change around the farm now, though, she said. The horses will be protected, and neither of the Jocos will take them for granted again.

“We take it for granted that we can put the horses out there, and they’re safe,” Joco said.

Police are asking for help from anyone who might know something about the incident or the truck.

Anyone with information about the incident should contact Crime Line at 1-888-Lock-U-Up. Crime Line callers do not have to give their names or appear in court. If a caller’s information leads to an arrest, the caller can qualify for a reward of up to $1,000.