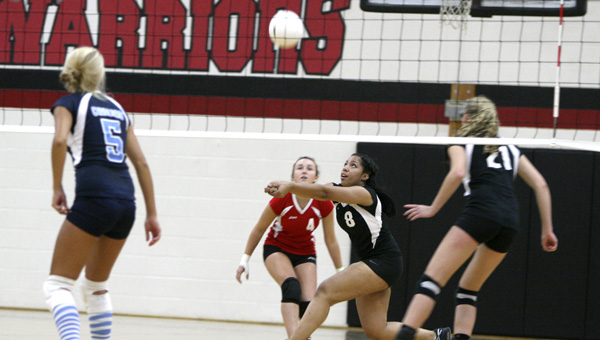 It wasn’t a comeback victory as the Cavs won the first two sets, but it sort of felt that way.

After Nansemond River led by as much as 18-6 in the third set and went on to win the game easily, Lakeland turned everything around as soon as the fourth set started. The Cavaliers jumped out to a 9-3 lead and never looked back.

“It’s just keeping your cool. Once a game is over, there’s nothing you can do about it and the next game starts 0-0,” said Bobby Estienne, a senior captain for Lakeland.

The Cavaliers claimed both big turning points of the match.

After Lakeland led most of the way in the second set, the Warrior hitters found their rhythm. Hayden Champigny, Brent Tomovik and Zach Vann all scored important kills and back-to-back aces by Vann put NR ahead 18-17.

The Warriors went on to have six set points, but all six went by the boards, mostly on NR errors. The Warriors, led by seven aces by Champigny, scored with a bunch of aces, but also missed too many serves.

Lakeland fought off a Warrior set point at 29-28 and a kill by Taylor Bess gave the Cavs the set, on their first set point.

Spurred by big serving runs from Champigny and Tyler Brown, the Warriors blew Lakeland out in the following game. Lakeland rallied late to make the score look closer. NR setter Josh Howard had nine of his 33 assists in the set and Champigny led NR with four kills.

For no apparent reason, Lakeland blew away Nansemond River in the ensuing game.

Cavalier setter Mike Estienne notched seven of his 14 assists in the final set. The Cavs got contributions from everyone on the court.

Dondre Jordan put down a spike, followed by Bobby Estienne taping a shot for a kill around two NR blockers to make it 12-5 Lakeland.

With the Warriors cutting into the lead a little, Tyler Mizelle scored a kill, followed by a Bess block and an ace by Mizelle to go up 17-9.

Bess had nine kills and six aces for the Cavaliers (3-2). Mizelle and Bobby Estienne had four kills each.

“It’s still early in the season, but it’s a huge rivalry we have with Nansemond River. We all get really stoked for it,” Bobby Estienne said.

“We were really poor serving tonight. It was about hustling and playing scrappy like we always do,” Bobby Estienne said.

Nansemond River led most or all of the way through each of the games.

The Lady Cavaliers ran off six straight points to take a 10-8 lead in the second set, but the Lady Warriors moved back in front as NR setter Shanna Coriano had success setting up her teammates. Courtney Lowers and Danielle Gallagher were the main recipients from Coriano’s sets.

Gallagher became more of a force as the match went along, especially at the center of the net. She won a number of points in the third set by killing or blocking errant Lakeland passes toward the middle of the net.

By Jeff Findley Columnist As the clock strikes midnight Saturday in Richmond, the 12 drivers who will compete for the... read more