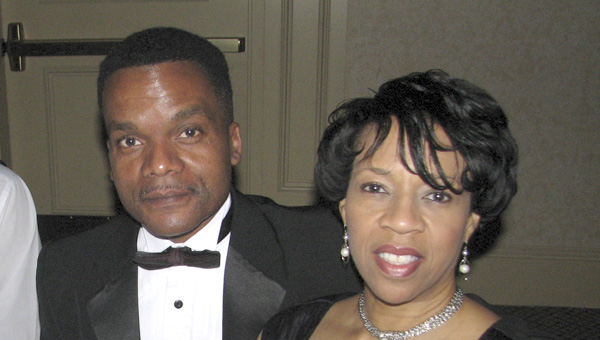 The next day, he was in City Council chambers during a regular meeting, just like nearly every meeting for the past 14 years. Dressed in plainclothes and trying to remain inconspicuous in the back row, he was there to make sure his replacement detail was doing the job right.

Council members took it upon themselves to make sure everyone knew he was there.

During the council comments session at the end of the meeting, most of the council members mentioned Jackson’s years of service and retirement party they had attended recently.

“He’s just been a wonderful addition to our city for a long, long time,” Mayor Linda T. Johnson said.

Jackson’s retirement was officially from the Suffolk Sheriff’s Department, but his time there was only a sliver of his law enforcement career. He spent four years in the U.S. Army, and then moved to the Port Authority police and the Suffolk Police Department before finally landing in the sheriff’s office for the last few years of his career.

He received the city’s Top Cop award in 2006 and was a highly visible figure both on the streets and in City Council chambers. He provided security for City Council meetings from 1996 until his retirement.

“I hope that my service has done something for City Council,” he said.

Jackson served from 1980 to 1987 in the Port Authority police, where he was hired by Chief Henry Collier, now deceased. Then, one day, he saw a Suffolk police officer directing traffic and took such notice of the officer’s sharply-dressed appearance that he wanted to join the Suffolk force.

“I don’t regret being a police officer,” he said.

Jackson began serving in the police department in uniform patrol in 1987. Through the years, he was also assigned to vice and narcotics and the community improvement unit. He was the drug evidence officer for eight years and was one of the first two officers appointed to a community policing unit. He was the first civic league liaison in the police department and also worked undercover in nearby cities for vice and narcotics squads.

“I really had a truly great movement within the department to get experience in how everything operates,” said Jackson, who earned the Officer of the Quarter award twice.

“That gave me a great feeling,” Jackson said. “It made me feel good for someone high-ranking to recognize my service like that.”

In addition to council security, Jackson served in the courthouse on a daily basis while in the sheriff’s department, mostly supervising inmates in the lockup but also sometimes doing courtroom or front-door security. He also helped with transportation of juvenile inmates and worked in the civil process division on occasion.

Jackson even continued his duties the day after his retirement by showing up to the City Council meeting.

“I came to show the other two deputies the operation of security to City Council,” he said.

Jackson already is hearing that he is missed, he said.

“I think that when you walk down the street and people say, ‘We miss you,’ it tells me that I’ve made some sort of impact,” he said. “It shows that I represented the department well and with respect.”

As for retirement plans, it’s possible Jackson eventually could have another official post in council chambers. He is turning his eye toward a political move, though he doesn’t know exactly what course he’ll take.

He and his wife also plan to spend more time with their grandchildren, ages 13 and 11, and take a trip to Hawaii — a special gift for his wife.

“I wanted to show my appreciation for her understanding and patience, for waiting up for me and praying for me,” Jackson said.

Jackson also plans to get involved in community organizations to continue his commitment to the city.