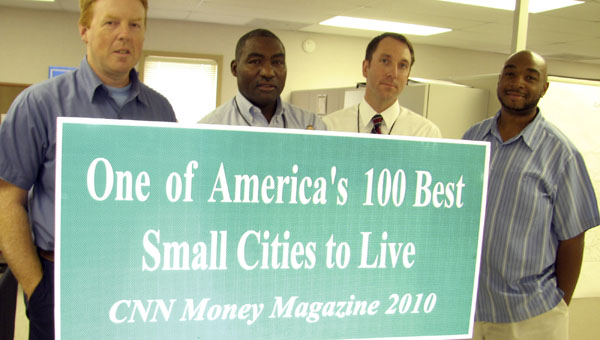 From left, Carl Taylor, Richard Brown, Jason Souders and Karl Marshall show off a rough draft of the “America’s 100 Best Small Cities” sign. A final version to be posted at entrances to the city still is in the works.

On a campus tucked away off Carolina Road, the city’s roadway maintenance division is hard at work every day.

Workers there make all the city’s roadway signs, paint the roads in all 430 square miles, maintain the signals at more than 100 intersections throughout the city and more.

Carl Taylor is especially hard at work most days. The city’s senior sign-maker, he can put together up to 30 signs a day, depending on their size.

“For bigger signs, it takes longer,” said Taylor, who started making road signs for the Virginia Department of Transportation in 2000.

As Taylor talked, he typed “SLOW MOVING EQUIPMENT NEXT 3 MILES” onto a computer screen, centered it on a rectangle and placed a border around it. After he hit the print button, a large industrial printer churned out a sheet with the edges of the letters perforated.

Taylor then took a knife and lifted the blank areas to reveal the letters. He then transferred the sheet onto an adhesive and put it aside.

Taking a large piece of blank metal, he used a high-pressure roller to apply a large sheet of orange reflective backing onto the metal. He then carved around the edges to get rid of the excess backing and used the roller again to transfer the lettering and border onto the backing.

The now-completed sign took about 30 minutes to make — about the time it would have taken to order a sign from an outside company.

“By the time you fuss with them about what size you want it and where you want the holes drilled, we can have it made,” said Karl Marshall, a department supervisor.

“You don’t have that middleman cost, that markup,” he said, estimating that the city would probably pay double the cost of maintaining the shop to order all the signs it needs.

“We can make anything they need, and we can do it responsively,” he said, noting that a stop sign can be replaced within minutes of being damaged or stolen.

“If you don’t have a stop sign, it’s critical,” Marshall said. “We could have some liability issues.”

In addition to fabricating all the city’s signs, workers in the paint division also paint all roadway markings the city needs themselves. Workers use everything from a large truck, for long line painting, to a device about the size of a wheelbarrow, for painting parking lots.

A variety of stencils and pre-cut options — such as arrows and words — also are available for marking roads. The pre-cut characters simply are placed on the road and heated with a torch until they meld to the pavement.

Using the large truck is more difficult, however. One workers drives the truck while another, seated in the back, does the actual painting. White and yellow paint sprays out of several different jets on the truck, while glass beads cover the layer of paint right after it is sprayed.

“That’s what we put in it so it will shine back at you at night,” Marshall said, showing a handful of the sand-like beads.

“That’s a lot to maintain,” he said of the inventory that would be needed if the city did not make its own signs. “Why wait for someone else to produce it?”

A Norfolk-based organization is hoping that proceeds from its new revenue-sharing license plate and a benefit concert later this month... read more