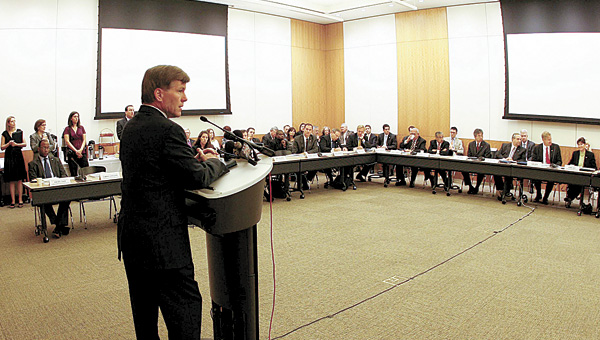 McDonnell speaks: Governor Bob McDonnell speaks to members of the Governor’s Commission on Military and National Securities in Richmond on Thursday. The commission is just one of several groups working to address a plan to close U.S. Joint Forces Command.

While Gov. Bob McDonnell and Hampton Roads’ congressional delegation work together at the federal level to fight the closure of U.S. Joint Forces Command, local officials are joining with the Chamber of Commerce to do what they can closer to home.

On the same day that Gov. Bob McDonnell spoke before the first meeting of his newly formed Commission on Military and National Security Facilities in Richmond, and a day after the area’s congressional leaders met with Pentagon officials on the issue, the Suffolk Division of the Hampton Roads Chamber of Commerce formed a special task force aimed at addressing the problem from a local perspective.

A group of about 50 people — financial leaders, property owners, investors, business leaders and others — got together Thursday morning at the Comfort Suites Harbour View hotel to figure out how they could help in the effort to save JFCOM, whose Suffolk location employs more than 2,200 people.

“It was a potpourri of everybody,” said Dean McClain, director of municipal affairs for the Chamber.

Those attending heard presentations from Suffolk Mayor Linda T. Johnson and Economic Development Director Kevin Hughes on the importance of JFCOM to the city.

They also talked about the three-part strategy that officials at the city, state and federal level are taking in their approach to the problem of losing JFCOM.

Reject, retain and replace are the watchwords of that strategy.

Officials at every level will work to have Defense Secretary Robert Gates’ recommendation to close JFCOM rejected as their first order of business. Failing in that strategy, they will work to retain whatever portions of the command can be saved. And in the case where the facility is closed altogether, they will work together to replace the jobs and the tax base with some other industry.

On Thursday, about 20 people volunteered to join the new Chamber task force, McClain said. Those volunteers will be split between the three strategies and given duties supporting each one.

Suffolk City Council member Robert C. Barclay will serve as a liaison between the council and the task force.

Meanwhile, at the state level, members of the Governor’s Commission on Military and National Security Facilities expressed their opposition to the Pentagon’s handling of the closure proposal. And they bristled at the lack of clear explanation from Gates’ office as to how he came to his decision, along with the fact that he has refused to return calls from either the governor or the congressional delegation.

Thursday’s meeting in Richmond came on the heels of a meeting on Wednesday between the congressional delegation and an undersecretary of defense in Washington.

Rep. J. Randy Forbes (VA-04) left that meeting with blistering criticism of the Pentagon for its continued reticence regarding the closure decision process.

McDonnell and others hope to find a way to heal the communications rift that seems to have developed.

“I have the utmost confidence in our commission to open the lines of communication with the Defense Department as well as prevent any final decisions from the president that would negatively impact the thousands of Virginians who are employed at the U.S. Joint Forces Command,” he said on Thursday.

School attendance is up this year