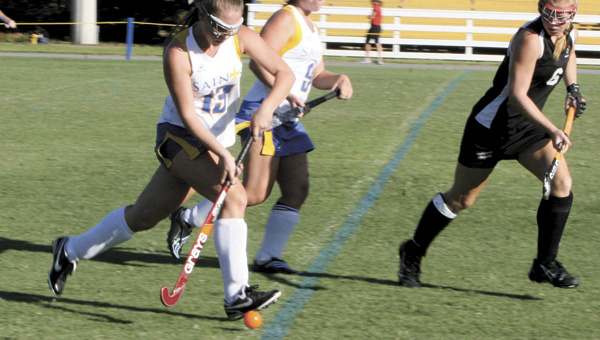 Walsingham spoiled the home-opening field hockey match for Nansemond-Suffolk and the debut of NSA head coach Ashley Aston Thursday afternoon with two goals in each half for a 4-1 win.

The opening half was a back-and-forth contest and the Lady Saints came close to taking the lead.

After the half, the Lady Trojans took control of most of the possession and most of the attacking to stretch their lead to a comfortable margin.

Junior forward Liza Bart Dolan showed speed and good ball handling on a number of occasions through the match and she had NSA’s first two dangerous shots on goal in the first few minutes.

The Lady Saints nearly made their good play pay off a little later in the half, in the 13th minute, when Kelsey White seemingly finished off a scrum of action in the Walsingham goalmouth with a goal. A whistle for the ball hitting a Lady Saint foot waved off the tally.

White and Brooke Starling combined on a restart just inside the Walsingham half. Three rapid NSA shots on goal ended with Alexis Clary knocking in a goal.

In the final minute before halftime, NSA defended a Walsingham corner, but barely as keeper Megan Luning saved three shots to keep the one-goal game within reach.

Walsingham kept the shots coming in the second half though and goals in the 40th and 50th minutes decided the match.

Luning, a junior making her first varsity start for NSA, finished with 13 saves.

Aston took over as Lady Saint head coach during the summer. Aston was a standout field hockey and softball player at Nansemond River. She was a four-year letterwinner as a defender for Virginia Commonwealth’s field hockey program.

NSA (0-1, 0-0) played in a tournament at the Steward School over the weekend. The Lady Saints play at Cape Henry Tuesday in a non-Tidewater Conference match.