Teachers get grant for drama 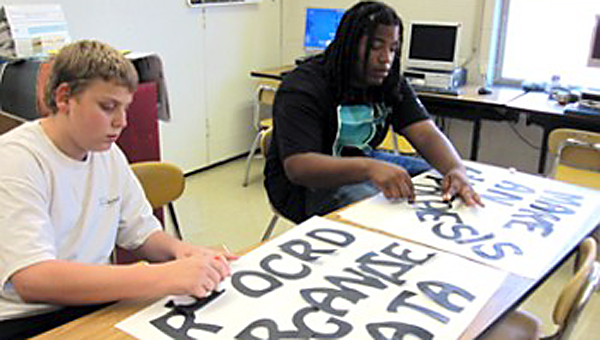 Timmy and Darious, a students at John F. Kennedy Middle School, make signs for “The Mystery of the Missing Sapphire.” The sign will be used as part of the play, which focuses on incorporating learning and drama to help students remember the steps to the scientific method.

Teachers at John F. Kennedy Middle School are putting a twist on learning thanks to a grant from Tidewater Children’s Foundation.

The school received a three-year $5,000 grant from the foundation to be used in its drama club, which will be conducting student-to-student plays and teacher-to-student plays that focus on incorporating learning through drama throughout Hampton Roads.

“There’s been a lot of research that has shown when you involve children in something, whether by singing or acting it out, you can teach them more than a character plot,” said Kathleen Applebee, teacher and drama club co-sponsor. “You can teach them content, like math and science.”

A group of teachers, volunteers and a professional actress will perform a sneak peek of the first of the plays, “The Mystery of the Missing Sapphire,” at 4 p.m. Sept. 27 for Suffolk teachers.

Teachers will be able to use activities before and after the plays to help students make connections with the English and science Standards of Learning.

“Everything correlates with Virginia Standards of Learning,” Applebee said. “Teachers have songs, visuals and the kids see or are in the play to help reinforce what they’re teaching in the classroom. It gives the students something memorable to hang the facts on.”

Applebee began incorporating teaching with drama about two years ago, when funds for drama became tight.

“The economy was and is bad, and there’s not a lot of money to pay for royalties, props and costumes,” Applebee said. “We got creative and decided to do a play on black history month, which we were able to get a grant for.”

“It was a success,” Applebee said. “We had one play, four showings and 940 people in attendance. I had kids coming into the school this year who remembered the play and wanted to sign up to be in the drama club.”

This year’s grant will enable the club to take the ideas behind the play and share them with other Suffolk and Hampton Roads schools.

The actors of the “The Mystery of the Missing Sapphire” are scheduled to perform a sneak peek in Virginia Beach on Oct. 4. The first student play will be performed Oct. 12.

Competition helps with STEM and SOLs

Students who participate in the Future City competition write an essay, build a virtual city and a material one. The... read more