Warriors, W. Branch must have rematch on links 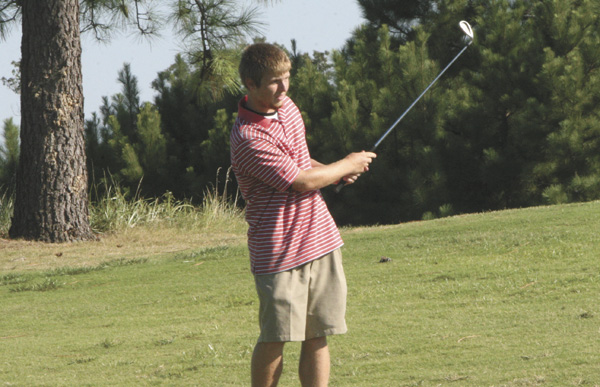 Nansemond River’s Jacob Foster, here watching his chip shot near the green on the par-three 11th hole, shot 84 Monday at Nansemond River Golf Club. The Warriors defeated Indian River 336-369 to finish the regular season 7-1-1. Nansemond River and Western Branch will play a 9-hole tiebreaker match Thursday to determine second-place in the Southeastern District and a team berth into the Eastern Region Tournament.

In Nansemond River’s first golf match of the season, back in early August, the Warriors and Western Branch played to a dead-even draw, 312-312, at Nansemond River Golf Club.

At the time, NR head coach Craig Stephenson partially predicted the tie would wind up meaning a tiebreaking rematch for the two schools once the district schedule was completed.

Monday afternoon at Nansemond River Golf Club, the Warriors and Bruins finished their regular seasons with equal 7-1-1 district records, in a tie second place in the Southeastern District.

Nansemond River did so with a 336-369 victory over Indian River. The other half of the equation the Warriors really wanted was a Grassfield win over Western Branch, which didn’t happen.

The top two teams in the regular season gain team berths into the Eastern Region Tournament, so that is the major prize on the line Thursday during a nine-hole match at a course still to be determined. The loser of Thursday’s match, just as teams four through 10 in the district, will play for one remaining team slot into regions in the district tournament.

Nansemond River’s win over Indian River was largely academic, but that the Warriors posted one of their highest team totals of the season didn’t make Stephenson happy.

The Warriors got solid scored from a couple players deeper in their six-player lineup. Jacob Foster shot 84 in the second group and Will Hunter shot 87 in the last pairing.

The Warriors were without normal No. 2 player Shanice Mason Monday as Mason had obligations for the Governor’s School in Norfolk. Stephenson said Mason would be back on the course Thursday.

Indian River’s No. 1 golfer, Kevin Wolfe, was the match medalist, shooting 1-over par 73.

Wolfe also turned in the individual highlight of the day. Wolfe holed out for an eagle on the par-four No. 14 by draining a short iron from the fairway, from 135 yards away. His shot landed two feet short of the cup and gently rolled in.

Stephenson he and his team would get the time and place for Thursday’s match sometime Tuesday.