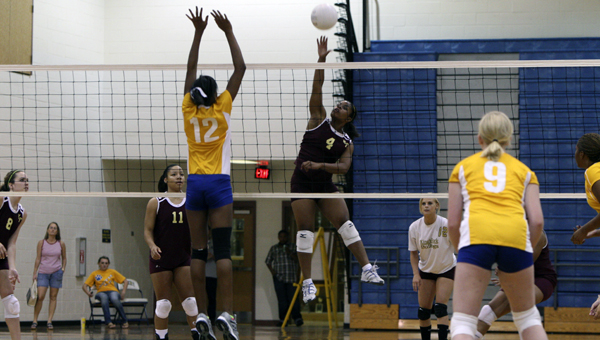 After trailing 3-0 in the tiebreaker set, the Lady Bulldogs still were down 11-10 before coming up with the clinching rally.

The opening set belonged to King’s Fork and it seemed such a marathon wasn’t going to be needed.

Oscar Smith worked back to within a point at 13-12 before the Lady Bulldogs won 11 of the next 13 points.

Townsend’s setting led KF early on. Crystal Collins had four kills and a block in the set, mostly during KF’s big run.

The Lady Tigers grabbed the momentum in the second set, getting out to a 14-7 lead.

King’s Fork rallied with a long run on Taylor Beale’s service to tie the set at 14. KF led for a point at 18-17, but Oscar Smith wound up taking the set and a back-and-forth contest was on.

The Lady Bulldogs, with an 8-0 run on Logwood’s serve, moved out to an 11-4 lead in the third set. Logwood served three aces in the streak, with Blythe adding two kills and Collins getting a kill and a block.

The Lady Tigers came all the way back and actually had a great chance to perhaps take control of the match.

Courtney Brown, who added more to the Lady Bulldog offense as the match progressed, finished with 12 assists.

In addition to Nichols’ hitting, the Lady Bulldogs got nine kills by Collins, six from Blythe and five each by Montgomery and Logwood.