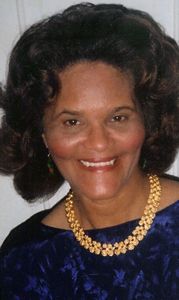 She was a native of Southampton County and the daughter of the late Robert Lee Adkins and Maner Lee Silver Adkins. She was also predeceased by her husband, Robert Lee Cobb Jr.

She was a graduate of East Suffolk High School. She retired as a school crossing guard with the Suffolk Police Department after 31 years. She was a member of St. Timothy Baptist Church and its usher board. Sylvia also was the treasurer of the Lloyd Place Civic League.

She leaves to cherish her memory one daughter, Sandra A. Cobb of Suffolk; two sons, Robert L. Cobb of Suffolk and Irving S. Cobb of Oakland, Calif.; one brother, Otis Adkins of Yonkers, N.Y.; an aunt, Queen Whitehead; and nieces, nephews, cousins and friends.

A service will be held at noon Friday in the Chapel of Crocker Funeral Home Inc., officiated by Rev. Robert Wilkins. Interment will be in Carver Memorial Cemetery. Condolences may be extended to the family at www.crockerfuneralhome.com.