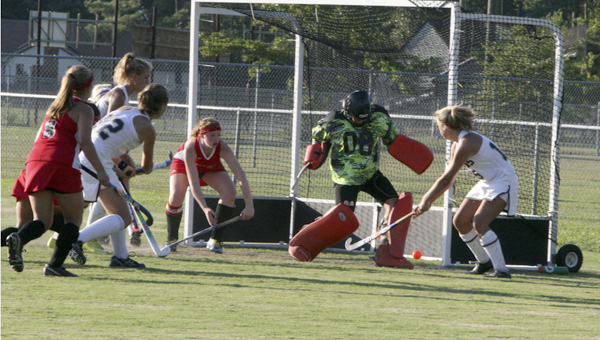 CHESAPEAKE – Led by a hat trick by Jessica Diaz, Western Branch handed Nansemond River its first Southeastern District loss of the season, doing so with a 5-0 rout Wednesday evening at Western Branch.

Diaz, a forward with sprinter-level speed for the Lady Bruins, scored two of Western Branch’s first three goals around a goal by Alex Darrow. Western Branch had its 3-0 lead in the opening 15 minutes of play.

Nansemond River (4-2, 3-1) put together a few chances to get on the board in the final minutes of the first half. The Lady Warriors earned penalty corners and long hits, but couldn’t turn the match around.

The hosts regained almost all of the possession and territory advantage after halftime and Western Branch put the result out of reach early in the half. Diaz finished her hat trick 6:50 into the new half to make it a 4-0 margin.

The Lady Warriors were shutout for the first time this year. NR won its first three district matches by a total of 16-2 and was coming off a 7-0 victory over Peninsula District opponent Heritage Tuesday afternoon.

“I don’t think we played as the disciplined team we actually are,” said Lady Warrior head coach Allison Mowry.

“We were leaving gaps open, not stepping to the ball. It was a lot of little things that hurt us,” Mowry said.

“We have to give a better effort through the rest of our district games and we plan on seeing Western Branch again in the tournament,” Mowry said.

Western Branch improves to 3-1 in the district with the loss being a 1-0 loss against Lakeland.

The Lady Warriors get a pair of home matches next week. NR hosts Oscar Smith Wednesday and Kecoughtan Friday.

Merriment on the Midway

Virginia State Fair returns, to everyone’s delight Once again, the Meadow Event Park in Doswell will have its green grass... read more