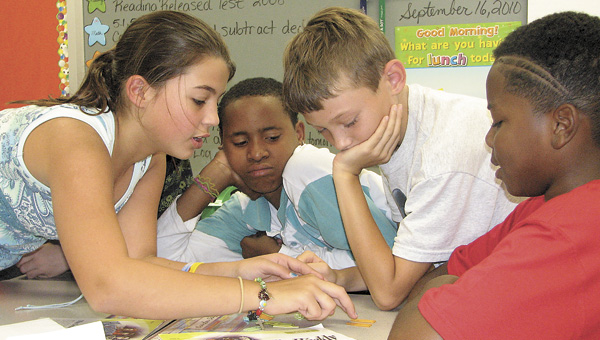 Constitution Day: Fifth graders at Mack Benn Jr. Elementary School (from left) Jamie Kerns, Darrell Nelson, Jake Reynolds, and Brandon Eley play a game in preparation for Constitution Day on Friday, when the students will participate in a web cast on Constitution Day.

The Constitution of the United States of America is more than a document — it has served as a foundation for the laws that have governed the country and the rights afforded its citizens.

In honor of Constitution week, Sept. 17-23, the Constantia Chapter of the Daughters of the Revolution is taking the document into schools, libraries and the city.

“The Constitution is the backbone of our nation,” said Faye Sobel, regent of the Constantia chapter of the Daughters of the American Revolution. “Most people know about the First Amendment, but little else about how it was formed and what else it holds.”

Suffolk Mayor Linda Johnson has signed a proclamation declaring the week “Constitution Week” in Suffolk, stating the Constitution is “an inspiration for fledgling nations and governments around the world.”

It highlighted that Constitution Week has been a national holiday since 1956, when President Eisenhower signed it into law after the Daughters of the American Revolution petitioned Congress.

To help educate people about the Constitution, the organization has helped the Morgan Memorial Library post bibliographies of books relating to the Constitution and the men who helped write it. School libraries also had educational displays of related books and a display placard of the Constitution.

“The library is the heart of the school,” Sobel said. “We wanted to make sure the information was available to students.”

During morning announcements at high schools, students were challenged with trivia questions, with answers being given the next day.

“Emphasizing Constitution Day is important in our schools,” Sobel said. “We looked at the calendar and saw that there is Grandparent’s Week and Women’s History Month, but there was nothing listed about the Constitution. I think it’s one of the least known national holidays we have, and we cannot take our Constitution for granted.”