Mattanock Town back on table 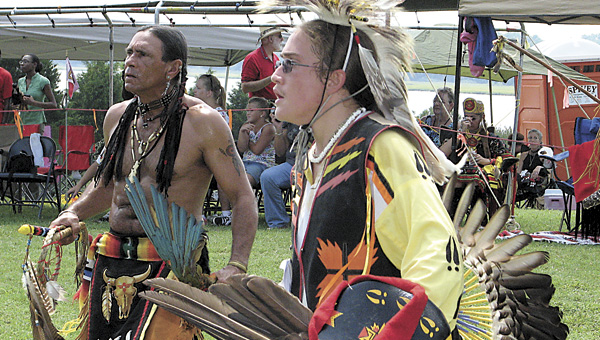 Asking for land: Participants dance at the Nansemond Indian Powwow at Lone Star Lakes Park this year. The tribal association is asking the city for 70 acres of its native land at the park.

A proposal for an American Indian village and cultural center is officially back on the table.

After meeting in closed session on the issue, Suffolk City Council voted unanimously and with little public comment on Wednesday to schedule a public hearing on a proposal to transfer about 70 acres at Lone Star Lakes Park to the Nansemond Indian Tribal Association. The tribe would use the land for an authentic re-creation of an American Indian village — called Mattanock Town — along with powwow grounds, a museum, a tribal center and reburial grounds.

“We’re really happy with the vote tonight,” said Nansemond Assistant Chief Earl Bass, who attended the meeting. “This is our home, and we’re not going to give up on it.”

“In order to sell land, you would have to have six votes, and we fell short last time,” Milteer said, referring to a previous vote several years ago. “We had five before. I think the votes are there this time.”

Milteer said nothing has changed except the number of supporting votes.

“This time, the support on council is there,” he said.

Negotiations between the tribe and the city have been going on for four years. The original proposal encompassed about 100 acres.

In June, the tribe’s attorney, Whitney Saunders, notified the city of the withdrawal of the original request and made a renewed request for about 20 acres of land.

However, City Manager Selena Cuffee-Glenn responded that the city could not recommend giving the land to the tribe for financial reasons.

“Given NITA’s assessment of the current economic climate and the lack of available funding to support the proposed concept of the Mattanock Town Project, the City is not in a position to recommend disposition of the property as requested in your letter of June 9,” she wrote.

However, the tribe wrote in an Aug. 3 letter to the city manager that it was rescinding the original letter and expressing continued interest in the project.

“That’s what we need to do,” said Nansemond Chief Barry Bass, who also attended the meeting. “It’s too important to us and our people to let go. We’ve got to keep on.”

Councilman Charles Brown, who opposed the project in the last vote, spoke favorably of moving forward just before Wednesday’s vote.

“We have been working on this for a long time,” he said. “We need to be fair with them. We need to work towards some closure.”

Milteer acknowledged he would support the plan.

“It would bring a tourist attraction to the city,” he said. “The Indians would benefit, and the city would benefit.”

The Nansemond tribe initially settled on land along the Nansemond River and had a village called Mattanock at what is now Lone Star Lakes Park. In the early 1600s, the tribe had a total population of about 1,200 people.

After English settlers arrived in the area, the tribe split apart and many died. In the 1800s, they began to call themselves “white with Indian ancestry” because of oppressive laws against non-whites, switching to “Indians with white ancestry” only after the Civil Rights movement.

In 1984, the tribe gained formal recognition by the state of Virginia. A bill that would extend federal recognition to the tribe currently is working its way through the U.S. Senate.