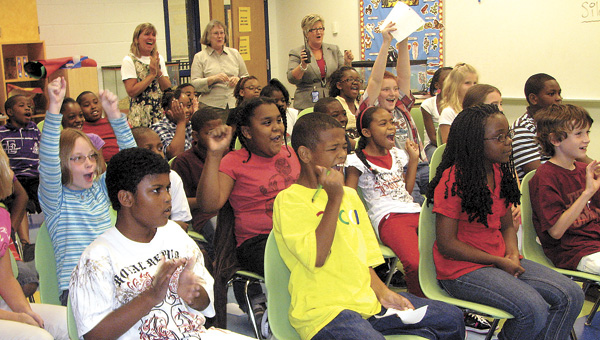 For many young children, their dream is to grow up to be an astronaut.

But unlike the many dreams to become police officers, firefighters or rock stars, wishes to become astronauts are far and few between.

On Thursday morning, however, the fourth graders of Jill Genier’s class at Hillpoint Elementary School were able to meet NASA astronaut Jon McBride, who was the pilot on the Space Shuttle Challenger during a 1984 mission, during a “Back to School Blast” hosted by NASA.

“It was awesome,” said Reegan Trimble, a student. “It was the first time I got to talk to a real astronaut. I’ve been looking forward to this for two weeks.”

The students were one of 12 schools from across the country chosen to participate in the videoconference, and the only Virginia school tapped for the honor.

The goal of the broadcast was to educate students about the space program and hopefully spark some excitement for space in them.

To do so, McBride took the students through a chronological timeline, beginning with the project Mercury, which took the first man into space in 1961.

He showed them photos of memorable moments and other astronauts, one of which was a class photo that included Sally Ride, the first female American woman in space.

Students were also able to ask questions during the videoconference.

Student Quaniasia Miller asked what his mission with the Challenger was, which McBride explained was to take photos of the earth.

“Some of them are used in Google maps,” he said.

The majority of student questions revolved around life in space.

Carletta Gibson asked what kind of food he ate in space.

“We bring fresh fruits and peanut butter and jelly sandwiches with us that last a few days,” McBride told the students. “Then we eat freeze dried foods, but they taste a lot better than the ones they used to have to squeeze out of a toothpaste tube. Sometimes we get vacuum-packed, thermally-stabilized and cooked steak. You take a bite, and it’s nice and juicy.”

To end the meeting on a more humorous note, McBride talked about some of the more interesting training astronauts had to practice.

“Our toilet was a four-inch hole that requires accuracy and precision,” McBride said. “It’s something you have to practice. You literally have to lock yourself down with bars to keep from floating away. It’s not something to try at home.”