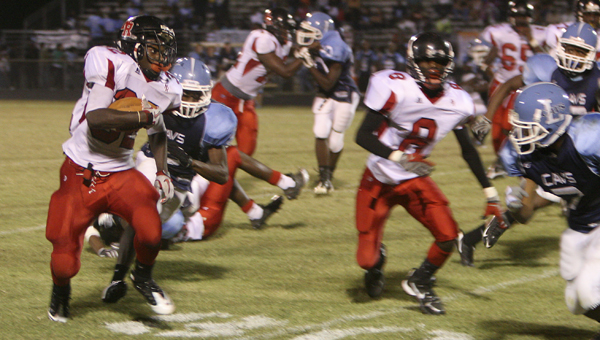 With wins over Lakeland and Menchville, the Presidents have already equaled their 2009 win total and two more wins would match all the President victories from 2005-2009.

Wilson was productive on the ground and in the air in beating the Cavaliers, but mostly the Presidents pounced on most of Lakeland’s errors and turnovers.

As he has been since his freshman year, junior Lamont Brown carried the load for the Warrior offense. Quarterback Justin Anderson added smart, efficient passing and dangerous running to Brown’s 31 carries.

No school in the state would want to see Oscar Smith while having to turn its season around. After giving up more than 40 points to Churchland and Hickory, that’s what the Bulldogs face.

The Tigers returned from playing at Ohio State and on ESPN, getting back to Southeastern District play, and promptly routed Indian River 35-3.

How a year’s changed things. Last year in week three of the season, Lakeland trounced Hickory 35-7 to go to a 3-0 record. Now, the Cavaliers already face a must-win game if they are to keep postseason hopes.

The Hawks are averaging 48.5 points per game in their two wins, with all the running and passing yards to go with all the points.

Nansemond-Suffolk’s 3-0 against the Ambassadors since they started football in 2006, winning by a combined score of 104-6. All signs from Norfolk Christian so far this season point to a different type of game this time around.

The Ambassadors are led by junior defensive end/running back Kwontie Moore. Moore, at 6-foot-3, 240 pounds, is receiving SEC and ACC level recruiting interest. In Norfolk Christian’s last two games, a 62-12 win over Portsmouth Christian and a 27-20 win at Hampton Roads, Moore’s rushed for four touchdowns, caught two TD passes and returned an interception for a TD.

The Saints might have played their two toughest opponents to start the season, but there’s not much room for error left for a return to the playoffs.