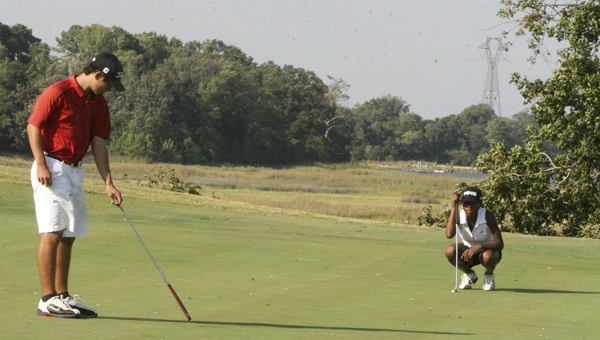 Nansemond River’s Shanice Mason lines up a putt on the No. 13 green while teammate Travis Johnson suggests a line to aim for Thursday afternoon at Nansemond River Golf Club. Western Branch beat the Warriors 330-333 in a tiebreaker match to determine the second Southeastern District school to gain an Eastern Region Tournament spot.

It wasn’t a pretty round of golf for any player, Bruin or Warrior Thursday at Nansemond River, in large part thanks to windy conditions all over the course along the high banks of the Nansemond River and marshland.

Western Branch gladly took the final result though as the Bruins edged the Warriors, 330-333, to claim second place in the Southeastern District and a berth into the Eastern Region Tournament.

In the first district match for both teams, on Aug. 10, the Bruins and Warriors tied at 312. The schools tied for second in the district standings with 7-1-1 records, setting up the 18-hole tiebreaker match.

The individual scores were telling of the frustrating conditions as well. Western Branch was led by Nick Iuliano’s 80. Nansemond River’s No. 1 player, Travis Johnson, was the medalist with a 78.

In the lead foursome, three of the four golfers found the water on their approach shots to the island green of the par-four No. 17.

Back on the par-five No. 9, three of the 12 golfers went out of bounds well right of the green on either their second or third shots.

Those two holes were by no means the only one to create big problems Thursday. Johnson and Shanice Mason found trouble with their second shots from the No. 14 fairway. The par four borders a steep drop into the marsh and both Warrior golfers hit shots off to the right that were pushed into the hazard by the wind.

Mason shot 83. Griffin Genier and Bryce Strong both shot 86 to make up the Nansemond River total.

With the loss, Nansemond River’s chances to reach the regional tournament rest on the Southeastern District Tournament. The top team other than Western Branch and Great Bridge, the regular-season district champ, will advance.

Sleepy Hole Golf Course is hosting the district tourney on Sept. 28 and 29.

There’s still time to reap nature’s benefits before winter The summer heat and drought was not kind to many vegetable... read more