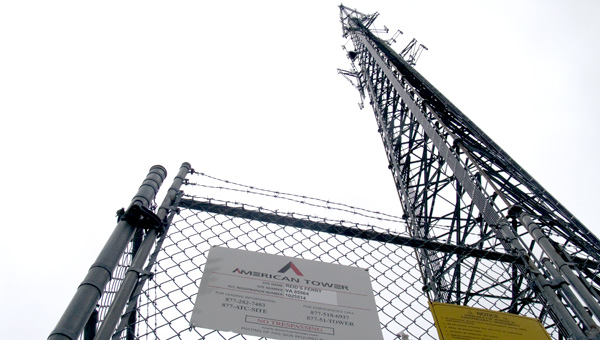 Tower: This cellular service tower off Godwin Boulevard was the site of a July accident that left one man dead.

The man who survived a BASE jump from a Suffolk cell phone tower just before his friend died attempting the same stunt must perform community service and pay restitution for the trespassing charge he incurred.

Jason James Tompsett, of the 5000 block of School Road in Virginia Beach, also is banned from American Towers’ properties and must pay $71 in court costs. He is set to return to court in March, when the misdemeanor charge could be dropped if he complies with the conditions.

Tompsett and Tyler S. Stimson, both U.S. Navy SEALs, leaped from the 259-foot tower, located down a gravel road off the 4000 block of Godwin Boulevard, just before 5 a.m. on July 16.

BASE jumping, an extreme sport, gets its name from an acronym for the four types of objects jumpers leap from — buildings, antennas, spans (bridges) and earth (cliffs).

A police investigation revealed Stimson’s legs got tangled in his parachute strings as he began to jump from the tower, causing it to fail to fully deploy. He was dead when paramedics arrived.

Tompsett was charged with trespassing. The cellular tower, owned by Boston-based American Towers, Inc., was clearly marked with “No Trespassing” and other warning signs and was surrounded by a high fence topped with barbed wire.

A General District Court judge ordered Tompsett to perform 25 hours of community service speaking to Navy or school groups about the dangers of BASE jumping. He also will pay restitution to Sentara Obici Hospital for medical tests.

Outside the courtroom Friday, Tompsett said only “I learned to live through it.” Dressed in a black polo shirt and tan pants and carefully folding court papers, he declined to speak further about what happened that morning.

According to a Navy press release issued after the incident, Tompsett and Stimson both were members of East Coast-based SEAL teams. Stimson enlisted in the Navy in June 2002 as a Navy SEAL candidate, and graduated the basic SEAL course in 2003.

Stimson was later assigned to a series of SEAL teams, where he made multiple combat deployments to Iraq and Afghanistan. He has received several combat awards and decorations. He was survived by his wife, parents and sister.