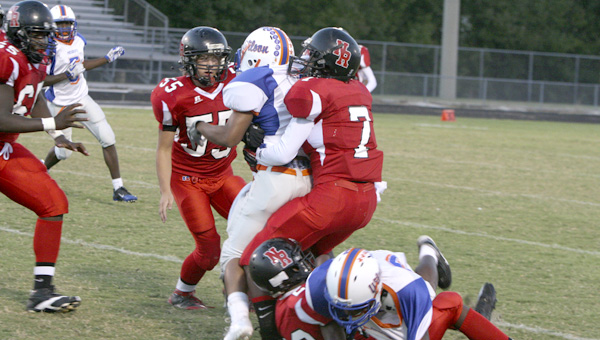 Defense: Nansemond River’s Gary Brooks brings down a Wilson ball carrier during the first half of Friday night’s game at Nansemond River. Wilson improved to 3-0 on the season with a 26-0 win over the Warriors (1-2).

Wilson held Nansemond River to -24 yards of offense in the second half while creating two turnovers and a blocked punt to turn a 6-0 halftime lead into a 26-0 win for the Presidents at NR’s Arrowhead Stadium Friday night.

Wilson goes to 3-0 on the season. With one more win through their seven remaining games, the Presidents will have as many victories this season as they collected in the past five seasons combined.

Trying to build off the momentum from last Friday’s win over city rival Lakeland — the Warriors’ first over the Cavaliers since 2006 — the Warriors put together a couple of promising drives in the first half, but that was as close to the scoreboard as the home team got.

On the opening possession, using a wing-T formation to open the game, the Warriors went to Lamont Brown on a wing, Jalen Thrower at fullback and quarterback Justin Anderson to move inside the President 20. The big gainer was a sweep by Anderson for 22 yards.

The drive bogged down, however, as the Presidents halted three straight Warrior running plays to stop NR on downs.

On the second President snap, quarterback Derwon Greene faked a handoff, rolled far to his left and following a bunch of blockers, raced down the sideline 76 yards for a touchdown.

Nansemond River’s only other promising possession was late in the second quarter. After the Warrior defense stopped a Wilson drive into Warrior territory on four downs, the Warriors moved to as far as a 4th-and-6 from the President 31, but a President sack ended the drive.

Wilson doubled its lead on its first drive of the second half. The Presidents relied on tailback Derrick Knight. He carried for 32 yards on the first snap of the half and finished a seven-play drive with a 30-yard touchdown run.

The Warriors didn’t get a first down after halftime. Alex Kase relieved Anderson at quarterback for a couple possessions, but a punt and an interception were the results.

Wilson scored twice in the final 4:33. Marzai Terrell, who played most of the game at quarterback, threw to Corey Fulcher for a 47-yard touchdown reception and LaDarrion Daughton blocked a Warrior punt and returned it for a touchdown.