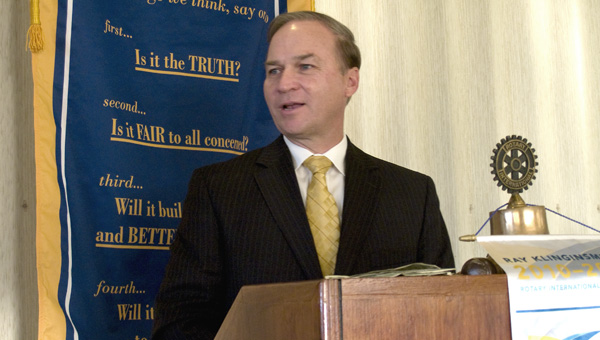 Before an appreciative audience composed mostly of North Suffolk business leaders, Rep. J. Randy Forbes (VA-04th) vowed Friday to do everything in his power to call the Secretary of Defense to account for a recommendation that U.S. Joint Forces Command should be closed.

Following up on a recent theme in the fight to save JFCOM, Forbes told members and guests of the North Suffolk Rotary Club that the Department of Defense has refused to provide information to show how it arrived at the decision to close the command.

That documentation had been sought by Forbes and other ranking Republican members of the House Armed Services committee, but Secretary of Defense Robert Gates did not respond to the request, Forbes said in a press release on Thursday.

“Today, I am even more disturbed that this unprecedented secrecy at the Pentagon has resulted in a blatant disregard for Congress — the very body that is tasked with oversight to raise and support our national defense,” Forbes stated in the release.

On Friday, he went even further in his criticism of the Pentagon.

“Every one of the members of Congress thinks there was no analysis done on this,” he said, explaining that he believes defense cuts were made in order to pay for President Barack Obama’s ambitious social agenda. “They have no analysis to give us. They’re working hard to create one now.”

If Republicans take control of the House of Representatives in November and then take office in January without the Defense Department plan having been carried out, he said, they would do whatever they could to forestall the closure.

“The only way we’re going to get action is we’ve got to create enough pain in the Department of Defense,” he said. “If we make it to January (without losing JFCOM), we will subpoena them and make them come before us. The only way you’re going to get what you want is you’ve got to subpoena them, including Gates — I just want five minutes with him — and including the documents.”

Closing JFCOM — which is headquartered in Norfolk and employs more than 6,000 people, including 2,200 at a satellite facility in North Suffolk — should be a decision that is subjected to the Base Realignment and Closure process, Forbes and others contend.

Failing to go through the BRAC process cheated employees who are residents of the area out of significant government help and resources to rebuild their lives, he said.

The result is that employees are left wondering whether they should try to sell their houses in the middle of one of the worst real estate markets ever and unsure what next steps they should take to protect their careers and their families.

“When you come out with an announcement like that, you ought to have a plan” for the economic fallout, he said. “Suffolk has just been wonderful to JFCOM. This just sends a message to every community in America: You are on your own.”