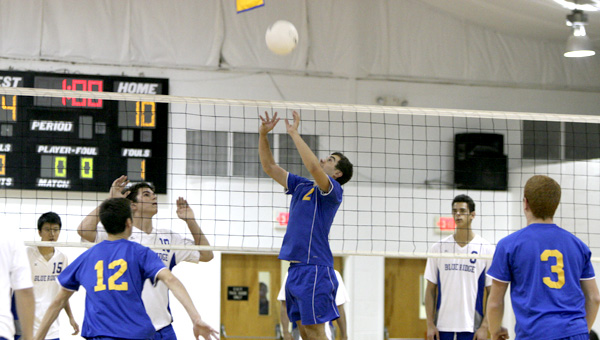 Nansemond-Suffolk cruised to a boys volleyball win over Blue Ridge Friday afternoon, sweeping the Barons 25-5, 25-14, 25-19. The win gave the Saints four straight victories, one more than they had all of last season.

With a 4-1 record, it’s actually the “1” that has shown the Saints are capable of reaching a goal co-captains Wes Edwards and Ray Ramirez set for the Saints on the first day of practice.

“Our team definitely has the will to win. We don’t want to be second-best. The TCIS title is our goal,” Ramirez, a senior who’s in his fifth season on the varsity squad and has been NSA’s main setter since his freshman year.

For a team with only three wins a season ago, it could have sounded as though it would be too tall of a task. NSA opened the season by falling to defending Tidewater Conference champion Cape Henry in a five-set match.

“We knew we could only grow from there,” Ramirez said.

In the four wins since facing the Dolphins, the Saints haven’t dropped a set. Friday’s match was simple from the start. Already holding a 6-2 lead in the first set, Edwards jump-served four aces in a 7-0 run. NSA went out to a 15-4 lead in the second set.

Ramirez and Edwards are the only two Saints who play club volleyball, but throughout the team there was a commitment to the sport that hasn’t been there in the past couple NSA teams.

“Everyone brings a lot more intensity to practice,” Ramirez said.

Many of the Saints on the roster are multi-sport athletes. C.J. White, who led the team with six kills Friday, is the starting lacrosse goalkeeper. Tucker Hotte, Bobby Wentz and Zach Crytzer are also lacrosse standouts. Harrison Spalding is a starting guard and one of the top scorers for NSA’s basketball team.

“They’re into it just as much as any other sport,” Edwards said.

“A lot of them have grown to love the game and for some of them, August was the first time they’d played it,” Ramirez said.

The Saints visit Norfolk Collegiate Tuesday evening. The Saints have two more matches before the conference portion of their schedule.