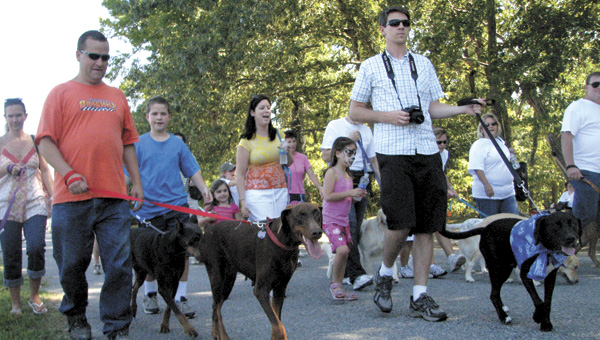 Dog owners take their pooches for a stroll at the Suffolk Humane Society’s third annual Mutt Strut on Sunday. The fundraising event generated more than $55,000 for the society’s prevention and education programs

Hundreds of dogs — some dressed to the nines in tutus and doggie-shoes — were at Sleepy Hole Park for a romp in the grass on Sunday afternoon.

“It’s great to know we have so much community support despite the economy,” Hurley said. “We’ve raised more today than we did in the entire event last year, and we know we’ll have some more funds come in throughout the year.”

“We are just so overwhelmed at the job our volunteers and supporters did this year,” Hurley said.

In addition to the increase in donations, there was an increase of sponsors and vendors this year, Hurley said. More than 25 businesses were sponsors, and more than 80 vendors and rescue groups participated.

“We came last year, and got [Emma] micro-chipped, but this year we’re just working on social skills,” said Jennifer Sterne, who brought Emma, a yellow Labrador retriever, again this year. “She’s like a kid to our family, and this is just one big play date.”

While many dogs were there for fun, there were a few with a more serious mission. Several adoption and rescue agencies brought some dogs looking for homes.

“We’ve had a lot of interest in some of our dogs and some reunions with ones we’ve adopted out here before,” said Melynda Roberts, president of Long Dog Dachshund Rescue. “After we came the first year, we’ve been dedicated to coming back. It really helps get our mission out there. Some people don’t understand why someone would need to rescue a dachshund, but their owners get sick, die, have allergies or divorce. We have plenty of great dogs just looking for a home.”

“This just makes me want 10 more dogs,” said Cristin Pond, as she walked by the tables with her white-and-brown dog, Tula.