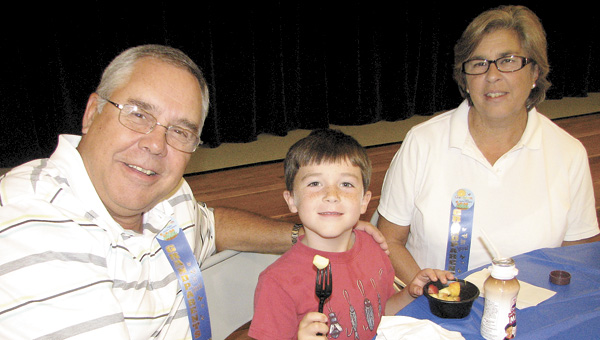 On most weekdays, children at Northern Shores Elementary School file into the cafeteria with lunchboxes in hand. This week, there was something extra special in store.

This week, Suffolk Public Schools are celebrating Grandparents’ Day, which actually fell on Sept. 12. At Northern Shores, parents and grandparents were invited to eat lunch with their students.

“It’s a real special week for us to have everyone’s grandparents here,” said Maria Eiring, guidance counselor at Northern Shores. “We had more than 50 grandparents come yesterday, and it’s great to see grandparents who came yesterday coming back today for another child.”

Students whose grandparents attended sat at specially decorated tables with their loved ones.

“Our children grew up with a Navy dad and never had grandparents nearby for Grandparent’s Day, so it’s nice to be able to do this,” said Debbie Ritter, who came with her husband, Ron, to visit their grandson, Tom Wolfe.

Ron Ritter took time off work to be at the school for his three Northern Shores grandsons.

Tom’s favorite part about his grandparents’ visit was the eating, he said.

Also enjoying a special lunch with his family was kindergartener Benton Carruth, whose dad, Jeff, was present in his military uniform.

“Because we’re in the military we don’t have any family near here, so we wanted to come and sit with him for lunch,” said Lynette Carruth, his mother. “It’s important for him to know how important school is to us and that it can be fun and we are involved.”