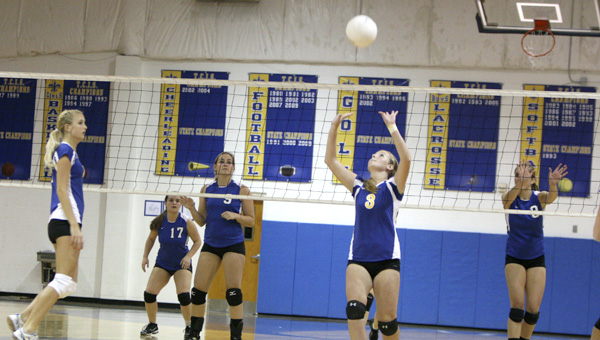 Nansemond-Suffolk’s girls volleyball squad fought back from behind once Tuesday against visiting Norfolk Collegiate, and was a point away from doing so a second time.

In a match of unpredictable momentum swings, the Lady Saints (5-3) looked overmatched in the opening set before storming ahead with a 13-0 run to take the second set.

In the third set, NSA opened with seven straight points before Norfolk Collegiate won the rest of the set 25-8. The Lady Saints regained their fine play almost all the way through the fourth set before dropping the final six points.

NSA’s leading hitter, Tori Dail, took over the second set after getting no kills in the opening set. Dail kills counted for three of NSA’s first four points.

Five straight Lady Oak points made it an 8-5 Collegiate lead. A Dail block ended the Lady Oak run. Dail proceeded to serve for 12 straight NSA points to an 18-8 lead.

Dail put down three aces and a couple more kills as NSA’s dual setters, Quinby Hines and Kelsie Halberg, found their rhythm in the set. Kaylor Nash added a kill and a block in the 13-0 run.

After bringing the match even, the hosts’ momentum built as Hines served NSA out to a 7-0 lead in the third set.

Norfolk Collegiate regained the lead at 14-13 and poured it on even more from there.

With a pair of kills by Dail and two blocks by Kela Bogaard, NSA took a 9-4 lead to start set four. The Lady Saints kept going to a 17-10 lead.

The Lady Oaks got back to within a point twice, but an odd streak of Collegiate errors and violations gave NSA three straight points to a 24-20 advantage.