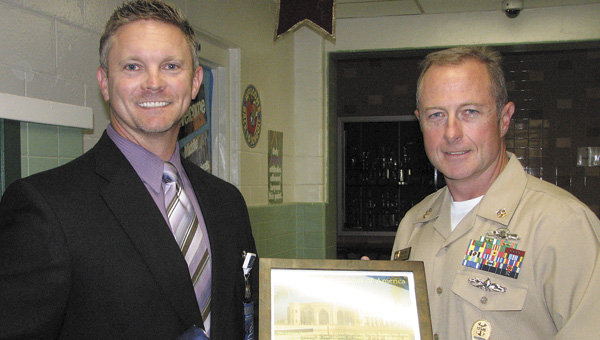 An American flag once flown during Operation Iraqi Freedom at Camp Victory in Baghdad, Iraq, has found its resting place at a Suffolk school.

U.S. Navy Lt. Jeffrey Gamble sent the flag to John Yeates Middle School, where it was officially received during a ceremony Tuesday evening.

Ethan and his sister, Cheyenne, both attend the middle school.

The flag was flown on June 15 at Al Faw Palace in Baghdad, Iraq, where Gamble is stationed.

“It’s an opportunity for the service members to fly a flag and send it to a loved one or important organization back home,” said Command Master Chief John Lees, who delivered the flag to the school.

Flags are sent to families, organizations, churches and other supporting groups of the military at no cost to taxpayers. The service member sending the flag pays for it individually.

According to Principal Daniel O’Leary, the flag will be placed in a protective shadowbox and displayed in the front office with the certificate that came with it.

“We serve a lot of military families, and they are an important part of our student body,” O’Leary said. “It’s an opportunity to thank them for all the work they do for us and the role they play here in the school. It’s an honor to have received this flag.”