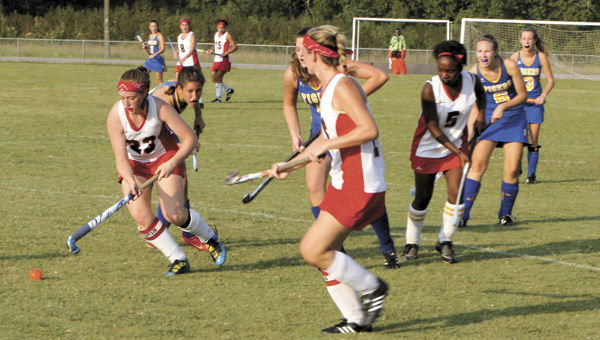 Open shot: Nansemond River junior Mary Gover turns to set up an open shot on goal during the first half Wednesday against visiting Oscar Smith. Gover’s shot was saved, but it set up a goal by Perri Holloman to put NR up 1-0. The Lady Warriors went on to a 5-0 victory in the Southeastern District contest.

It took awhile for them to get going, but Nansemond River eventually scored five goals in the final 32 minutes of play for an easy 5-0 district win over visiting Oscar Smith Wednesday evening.

The Lady Warriors outshot Oscar Smith 31-0 and earned 13 penalty corners to none by the Lady Tigers, so the outcome of the match seemed set from the first few minutes.

All the possessions and shots in the world don’t mean anything, though, without the ball going in the net. It took 15 Lady Warrior shots and nearly the whole first half for Nansemond River to take the lead.

It took an excellent play down the left side of midfield and into the Oscar Smith arc to score the goal. Jessica Adams and Audrey Dailey controlled the ball until Dailey passed it to Mary Gover as Gover moved into the circle.

Gover struck a shot on goal from 10 yards out, forcing a save by the Lady Tiger keeper. The rebound deflected to the open area of the arc to the right. Perri Holloman controlled the deflection and took her time with a shot into the mostly-open cage.

The goal with just under two minutes to go in the half didn’t do much to calm the halftime speech from NR head coach Allison Mowry.

“I pretty much told them if we wanted to win the game, we had to pick it up. Every district game from here is critical if we want to make the playoffs,” Mowry said.

“I just don’t think we were finishing like we are supposed to. We weren’t being aggressive enough in the circle,” Mowry said.

The speech apparently worked, as Holloman scored her second of the match 2:28 into the second half.

Erica Dover set up the attack, racing with the dribble into the OS arc and putting a shot on goal. Holloman followed with a shot and followed her own rebound with a backhanded flip of the ball up and into the cage.

On the ensuing Lady Tiger restart, the Lady Warriors had possession again in a couple seconds and stormed forward. Dover scored the goal herself this time, coming 0:17 after Holloman’s goal.

Suffolk’s Warriors and Hampton’s Warriors usually meet once a season on the field hockey field, but there’s an especially high level of familiarity this time around.

Mowry, a Nansemond River alum, and Kecoughtan head coach Natalie Bowen, a Kecoughtan alum, were teammates and roommates for four years at Radford. Both coaches are in their first year coaching at their old high schools.

The owner of a home in the 300 block of Spruce Street was displaced by a fire that severely damaged... read more