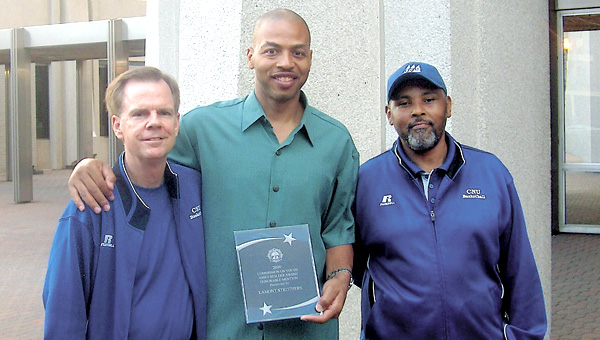 Lamont Strothers was one of the all-time best on the basketball court for Suffolk’s Forest Glen High School and Christopher Newport University.

He went on from being a Captain to a pro career with two NBA teams and overseas.

Basketball’s in his blood, and he loves teaching the game these days. So it’s no surprise hoops is a major part of what Strothers is heading up at Mary Estes Park on Saturday, Oct. 2.

G.E.S.U.S. Ball 2010 Stop the Violence Community Fest will include non-stop basketball action. There is a higher purpose for the day, though.

“We want to get out and show that no matter what differences there might be, sports is the biggest fraternity in the world,” Strothers said.

“We can get kids together and have them play versus each other and show sports are a big way to bring kids together. It can be a way to promote peace and unity,” he said.

Strothers organized and coached basketball clinics and tournaments during summers in Suffolk a few years ago. On some nights, 500-600 people came out to a park.

“It showed a neighborhood can come together and have a good time without the fighting,” Strothers said.

The Fest will feature adult and youth basketball tourneys. Five teams, with squads made up of the Suffolk sheriff and police departments and Suffolk Parks and Recreation, for instance, will play in the adult portion of the event.

“Everything else is about getting as many kids out as possible,” Strothers said. “We want to get three or four or more teams in each age group.”

The youth games will be 3-on-3 games for ages 9-17. There will be winners and losers, but the day is really about fun, free food, being a community and showing the community’s talents.

As much as Strothers loves basketball, it’s far from the only lesson he tries to teach.

Strothers is the president and chief executive officer of G.E.S.U.S. (Growth through Education, Sports, Unity and Spirit) Ball in Newport News and Hampton.

Part of G.E.S.U.S. Ball is competitive, AAU-level basketball. More important, though, are programs such as summer camps and father-son basketball camps.

“It’s a way to connect kids with other kids who are doing positive things. We try our best to let them know there’s something more out there,” he said. “It’s a big world and you can explore it and be a part of it with your potential and your dreams.”

With those goals in mind, guest speakers, gospel performers and a talent showcase are set for Stop the Violence Community Fest.

“Not all kids play sports, but they all need to have an outlet, an avenue, to express themselves. Maybe it’s through dance or song, poems or writing,” Strothers said.

“We want to show again it’s possible to unite the youth. With the killings and crimes going on, it’s still possible to curb that attitude and change people’s mindsets,” Strothers said.

Open shot: Nansemond River junior Mary Gover turns to set up an open shot on goal during the first half... read more