Bulldogs looking to break through 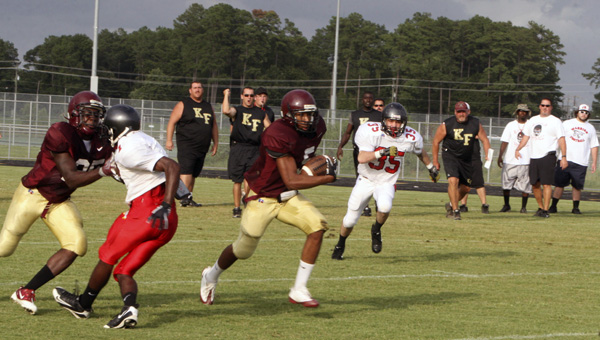 Last year, the Bulldogs and Braves played about three quarters of football at Nansemond River before a big thunderstorm hit. The teams finished up the final quarter the following Monday afternoon at King’s Fork with the Bulldogs taking a 35-14 victory.

This time around, Indian River’s field is under repair, so the game’s been moved to Chesapeake neighbor Hickory.

At least compared to most teams facing Oscar Smith, King’s Fork’s defense did well to hold the Tigers to a 13-0 halftime lead, but it still wound up a 34-0 Oscar Smith win.

The Cavaliers were 3-0 coming into this matchup last season and the Wildcats claimed a 42-0 victory at Cavalier Park.

As is now tradition for the Wildcats, their passing attack leads the way. Quarterback Brad Hudson had a down game in throwing for 160 yards with one passing touchdown and one rushing TD in last Friday’s 24-21 win over Western Branch. Hudson racked up 359 passing yards in a rout of Deep Creek earlier this season.

Both of Hudson’s TDs last week came after Western Branch had a 21-3 lead during the third quarter.

The Bruins are winless, but have played Grassfield and Great Bridge down to the final possession.

Last September, Western Branch edged the Warriors 10-9 at Arrowhead Stadium. Lamont Brown carried 26 times for 164 yards for the Warriors. NR took the lead on a touchdown with 7:32 left before the Bruins made it 10-9 with a field goal with 5:36 to go.