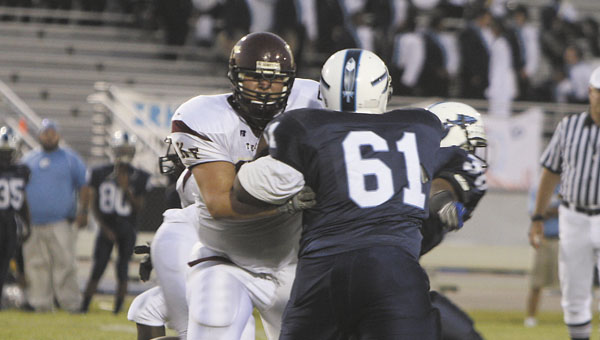 CHESAPEAKE — With three touchdowns in the last 7:37, Indian River (2-2) prevailed for a 20-19 Southeastern District win over King’s Fork, holding on despite last-second heroics by the Bulldogs (0-4, 0-3).

The Bulldogs seemed to have another defensive stop early in the fourth, but a roughing the punter penalty against the Bulldogs resumed an Indian River possession at the Bulldog 45.

Three big gains later, all on the ground, IR’s Luther DeBerry sprinted around the left end on a pitch play and scored on a 10-yard run.

After what was mostly a well-played game, penalties continued hurting the Bulldogs. Two illegal substitution calls forced KF into a three-and-out. The Braves set up in good field position with 5:16 left.

KF linebacker Tishon Madison turned in a tackle for loss and a sack on back-to-back snaps, forcing the Braves into a 4th-and-7 play.

IR’s Juwan Alvarado threw a wide screen to Kerry Spellman. Still likely short of the first-down marker, Spellman broke a tackle and had nothing but green grass in front of him from there. Spellman went 57 yards for the tying touchdown with 2:40 left.

As big a turnaround as the Braves had already made, the truly crazy part of the game was still to come.

KF’s Joseph Hill blocked the extra point, breaking through the center of the line to make the play, keeping the Bulldogs tied 13-13.

Charles Clark, who rushed for 162 yards on 12 carries, nearly fumbled away the ensuing kickoff. Lawrence Allen survived the bottom of a huge pile and came away with the ball to save the Bulldog possession.

On the second snap for the Braves, Alvarado rolled way to his left and lobbed a pass for Spellman who was wide open down the left sideline for a 67-yard touchdown. IR led 20-13 with 0:35 left.

After being so close to their first win of the season, the Bulldogs kept playing and then some.

After a quarterback scramble by Matt Hommell, then a sack and a timeout, the Bulldogs pulled out a hook-and-lateral with Hommell hitting Davon Grayson on a 12-yard pass and Grayson pitching to Clark. Clark raced 20 more yards to the IR 25 and went out of bounds with 0:05 left.

On the final play of the game, Hommell lofted a pass into the right side of the end zone. Hill went up alongside an Indian River player, both got some of the ball, but Hill got more of it and wrestled it away for a touchdown.

The Bulldogs went for two points and the victory. Clark got a handoff going up the middle, but the Braves stuffed the play at the line to save the one-point win.

Four of KF’s five first-half possessions started in Indian River territory and the Bulldog offense finally made it pay off late in the half.

De’Quan Fofana, who took a little less than half the snaps at quarterback, connected with Hill slanting across the end zone for a 9-yard TD play with 1:04 left before the half.

George Riddick’s sack and strip of the ball and Madison’s fumble recovery gave KF the ball again at the IR 45 with 0:19 left in the half. Hommell passed to Clark for a 25-yard touchdown on the last play of the half.