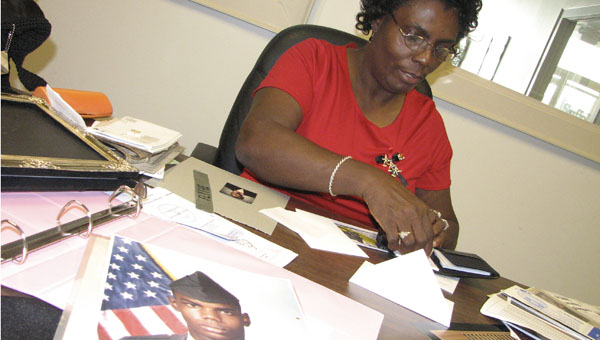 Fallen son: Mother LaVerne Flythe goes through scrapbooks filled with photos and mementos of her son, Dameyon, who was murdered in 1997. Three years later, Flythe began the Suffolk chapter of Parents of Murdered Children.

Dameyon Flythe had just returned from Blackstone after successfully completing his tests to qualify as a sergeant in the U.S. Army, where he served at the front lines during Desert Storm.

He was looking over the newspaper on Sunday, May 4, 1997, reading an article about his friend Jeff Barnes, who had been murdered.

“Just don’t be in the wrong place at the wrong time,” his mother, LaVerne Flythe, said to him.

Later that morning, Flythe started to wonder what was going on, she said.

“We were at church and as he was putting money in the offering table, he gave me the weirdest look and just said, ‘I really love you,’” she said.

At 6:30 that evening, he left his family’s house to go to a friend’s home.

“I called him at 8 p.m. because something was just off, but he was on the phone,” Flythe said. “He never called back, and for some reason I couldn’t sleep that night.”

A reporter on the 11 o’clock news announced a tragic murder in Newport News, and “I was just up walking the floor from 11 p.m. to 1 a.m.,” Flythe said.

It was 2:45 a.m. when there was a knock on the door. Dameyon had been shot and killed on his way to a friend’s house.

“It’s something no parent should ever have to go through,” Flythe said. “The pain is unbearable. You can’t explain it. There are no words for it.”

Today is the Parents of Murdered Children’s National Day of Remembrance to honor the lives and memories of their children.

In 2000, Flythe began the Suffolk chapter of Parents of Murdered Children with other Suffolk parents whose children had been murdered.

“When Dameyon was murdered, there was no one to talk to,” Flythe said. “No one understood. You wouldn’t ever wish anyone did, but you long to know that someone else understands your grief.”

The parents also extend their hands to other parents whose children are murdered.

“It’s the saddest thing about our group, is that it keeps growing,” Flythe said. “We understand, though. We understand what parents go through. It’s after all the family has gone that we let people know we’re here. That’s when it’s loneliest, after your child has been put in the earth.”

To find out more about the group or how to be involved, contact LaVerne Flythe at 934-0341.

They seem harmless enough sitting in a cabinet or stuffed in drawer, but unused prescription drugs pose a danger to... read more