Crusaders air it out past Saints 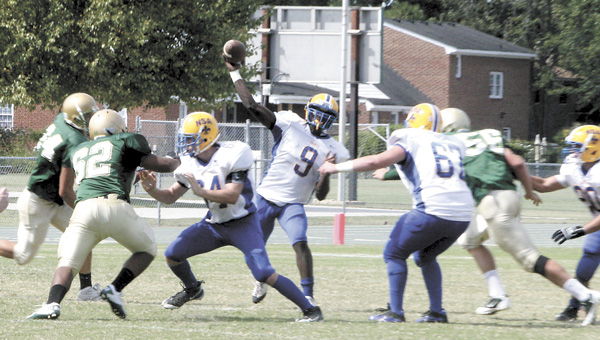 Nansemond-Suffolk quarterback Domonique Lennon throws in the second half of Saturday afternoon’s Tidewater Conference game at Bishop Sullivan Catholic. Bishop Sullivan scored the last 14 points of the game to beat the Saints 30-16.

VIRGINIA BEACH – Bishop Sullivan Catholic scored two touchdowns through the air and another on the opening kickoff of the game to get its second straight victory over Nansemond-Suffolk 30-16 Saturday afternoon.

The Saints (1-3, 1-1) fought back to even after giving up an 81-yard kickoff return and again after falling behind 16-7 early in the second quarter, but never truly seizing control of the game was head coach Kevin Allen’s main disappointment for his Saints.

“We needed to play with a higher intensity,” Allen said.

“We’ve got to bring more intensity and that goes for the very beginning of the game. We’ve got to realize we’re the defending state champions and we have to come out fired up from the beginning,” he said.

NSA’s rushing attack was the way the Saints worked their way back into the contest.

Backs Ryan May and Bobby Lamm carried most of the way on an 11-play, 68-yard march and quarterback Domonique Lennon bootlegged into the left corner of the end zone on a 9-yard run.

With a 65-yard touchdown pass and a poor punt snap by NSA giving the Crusaders a safety, Bishop Sullivan gained a 16-7 lead.

Following the ensuing free kick, NSA’s defense forced Bishop Sullivan into 3rd-and-long and Thomas Westfall intercepted a tipped screen pass to give NSA the ball on the Crusader 34.

It took the Saints 10 plays and 5:09 to grind their way those 34 yards, but May carried in from five yards out.

After forcing the Crusaders to punt from their own end zone in the final seconds of the half, Lennon connected with Lamm for a short pass to the BSC 21. Lamm got out of bounds for a first down, but was ruled to have had his forward progress stopped while inbounds, so the clock continued to tick.

NSA tried spiking the ball, but the last second ticked away as Lennon spiked the ball, not allowing NSA a field goal attempt.

Getting the ball to start the second half, NSA moved 36 yards in 14 plays and 6:40 off the clock. NSA tied the game with Lamm, albeit with a healthy wind helping, booting a 50-yard field goal with four or five yards to spare.

The Crusaders struck much quicker than the Saints and regained the lead for good. BSC moved 80 yards in 1:59. Brian Novak’s second touchdown pass of the game made it 23-16.

Novak capped a long Crusader drive through most of the fourth quarter with a 5-yard touchdown run. Novak finished 11-for-21 passing for 188 yards and with 34 rushing yards. Brandte McIntyre was his top receiver, catching both touchdowns and for 145 yards in all.