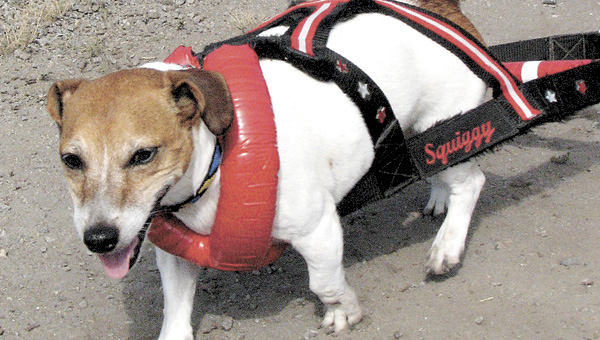 Mighty dog: Squiggy, a 15-pound Jack Russell terrier, demonstrates what it takes to compete in the UKC weight pull competition.

Dogs show off their strength in weight-pull exhibition

She pulled 2,100 pounds on a rail last year at a United Kennel Club weight pull competition.

It might seem unbelievable, but Squiggy is part of an elite group of dogs that compete in dog weight pulling. On Saturday, she was just playing around for a weight pull demonstration held at Farmer Frank’s Farm Market. 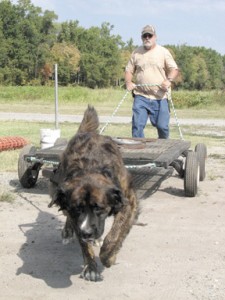 “The whole goal of it is to get people to mess with their pets,” said Debbie Lee, a local dog weight pull organizer. “I don’t care if it’s agility training or flyball, but dog owners need to get out and do things with their dogs. The dogs need something they can work at and do well with. It gives them a sense of accomplishment.”

Dog weight pulling began as a way to keep sled dogs in shape during off-season. It has developed into a sport for dogs to see how much weight they can pull on a wheeled cart a distance of 16 feet within a minute on natural ground, carpet or rails, depending on the competition. Dogs of all breeds and weights are able to compete in their own weight class.

Lee owns several dogs — most of them rescued — and has been training dogs in weight-pulling for nearly 20 years.

One of her dogs, Rochelle, a Saint Bernard, was “uncontrollable” when she first got her.

“She didn’t know anything about leashes, and when she’d see a cat she was really gamey for it,” Lee said. “After all the training we did with weight pulling, she would let cats come and rub up against her. Weight-pulling gave her something to do. She needed her own [identity].”

Rochelle went on to win top dog for four years in a row, pulling up to 8,000 pounds. Pulling four tons of weight around isn’t an accomplishment that happens overnight, though.

“The dog has to want it,” Lee said. “There has to be a lot of training, and the dog really has to want it. When they don’t want to, there is nothing that will make them move.” Lee works with her dogs by gradually increasing the weight they pull. To condition, the dogs can pull chains around a yard, but cement blocks are used in competition. The dog is then harnessed to the cart and on cue, it pulls the cart. “Their owner is always up at the front talking with them, and there is always someone behind the cart,” Lee said. “If for some reason the dog can’t make it move, the owner signals to the people behind the cart, and they push it. You never, ever, ever want the dog to feel they failed.”

Lee emphasized that it’s a sport that provides obedience training, fun and a sense of accomplishment for the dogs. “When I move the van or a piece of equipment, my dogs go crazy,” Lee said. “They love it. No one will eat their supper, because they think they’re going to a competition.” The bottom line is the fun.

“We’ve had three legged dogs compete,” Lee said. “It’s just trying to have fun and give the dogs something to do. Any breed can do it.” To find out more about dog weight pulling, visit www.iwpa.net. A sanctioned International Weight Pull Association dog weight pull will be held Nov. 6-7 at Farmer Frank’s in Holland. Call 357-0942 for more information.