Alzheimer’s: Behind the disease 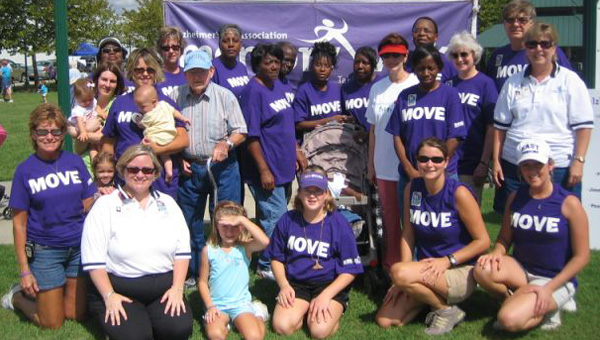 The Southampton Memorial Hospital East Pavilion team joins for a photo before the 2007 Memory Walk in Franklin.

Alzheimer’s is much more than a senior moment.

It is the seventh leading cause of death and affects more than 5.3 million people in America. It has no cure — yet.

To help raise money for research, the Alzheimer’s Association of Southeastern Virginia will hold a Memory Walk on Oct. 16 at 10 a.m. at Constant’s Wharf Marina in downtown Suffolk.

“Alzheimer’s disease is a tragic illness with economic and human costs,” said Dr. Scott W. Sautter, medical/scientific chairman for Alzheimer’s Association Southeastern Virginia chapter. “It robs a person of their identity and with 77 million Baby Boomers poised to become early seniors, it could potentially bankrupt Medicare in 20 years. That’s why there’s a race for research.”

Alzheimer’s is a fatal brain disorder and the most common form of dementia. It operates by destroying brain cells, which causes memory loss and problems with thinking and behavior.

“It takes decades for Alzheimer’s to produce a noticeable effect,” Sautter said. “At first, it can show up by a person repeating themselves and not realizing it. Eventually, it will affect their daily responsibilities. At some point, they’re not aware they have it.”

The disease also has a multitude of physical effects.

“It is an erosion of the brain cells,” Sautter said. “Eventually, so many will be eroded that it will affect things like a person’s breathing and heart. The brain cells controlling your body — telling your heart to beat — will die off.”

Plaques and tangles are the two abnormalities that are believed to contribute to the deterioration. Plaques build between nerve cells and tangles are twisted fibers that form inside dying cells. Both are common as a person ages, but people with Alzheimer’s have many more.

“It takes place one brain cell at a time by developing an overproduction of a protein,” Sautter said. “It’s like a glue system that mucks up the process of the brain.”

While there is no cure for Alzheimer’s, there are medications and activities that treat the symptoms.

The most recent breakthrough in a cure was about five years ago with the use of a radioisotope with an affinity for the plaque. It can be injected into the blood stream and travel to the brain, where it sticks to the plaque. Researchers then could take a picture of the brain to see the plaque. They began to develop drugs to break up the plaque, but the study was canceled when people began to develop meningitis.

“It worked very well for people without the side effects,” Sautter said. “It’s a very interesting line of research. It’s very promising, but studies can take years.”

Alois Alzheimer first recorded a description of the disease in 1906. A breakthrough for the disease wasn’t made until the 1980s.

Now, the race is on.

“We are in a crisis,” Sautter said. “It is costing people lives and costing the healthcare system millions of dollars. The importance of educating people, researching and finding a way to minimize or stop this disease is critical to the function of our country.”

Visit  www.alz.org/seva or call 459-2405 to find out about donating, signing up to walk or registering a team.