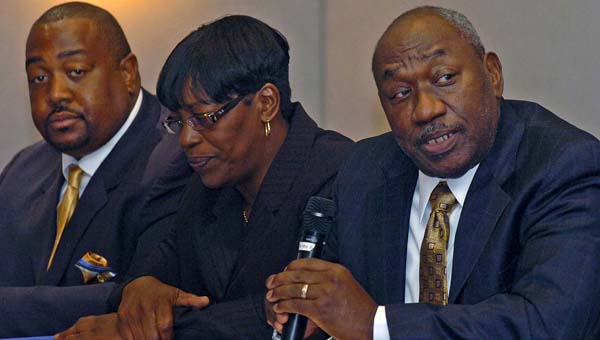 Suffolk native and Booker T. Washington High School standout Ronald Hart was inducted into the North Carolina A&T Sports Hall of Fame on Sept. 3 in Greensboro, N.C. Hart was a running back, defensive back and kick returner for the Aggies. Hart taught science and coached football at East Suffolk High and John F. Kennedy High as part of a 33-year-long teaching career. He has also served on Suffolk City Council and is currently the president/CEO of Metropolitan Church Federal Credit Union.

As clearly as if the game was last Saturday afternoon, Ronald Hart remembers the second half he and his North Carolina A&T Aggies played against Virginia State during his senior year.

“We were behind by three touchdowns and we were able to come back and win in the fourth quarter,” Hart said.

He’s the best person to recall the game for an excellent reason.

Earlier this month, before N.C. A&T’s home-opening football game, Hart was inducted into the N.C. A&T Sports Hall of Fame for his career as a running back and defensive back.

“In those days, if you were good enough, you played both ways and that’s just the way it was,” Hart said.

Between practically every offensive and defensive play, plus returning kicks on special teams, “I would say I was on the field 85 or more percent of the time,” he said.

“I was very fortunate not to get the injuries so many players get today.”

Hart’s time as an Aggie great is bookended by many years and great contributions as an athlete, coach, teacher, community leader and business leader in Suffolk.

“It was a very small high school. Everybody knew everybody,” Hart said.

Lane Parker, a N.C. A&T alum, coached the football team and while Hart says football was always his best sport, “I didn’t really consider myself one of the better athletes.”

“With Coach Parker’s and Coach Christian’s help, I received a full scholarship to A&T,” Hart said. “As far as I’m concerned, they prepared me physically and mentally to be successful in college.”

Perhaps that explains a lot about Hart’s path after college.

Hart entered college planning on being a doctor and he earned his degree in biology and chemistry.

After an unsuccessful tryout with the Detroit Lions, he started teaching science at East Suffolk High School, only a few years after playing on the other side of what was a big Suffolk rivalry.

“It was a game we always waited for, playing your friends just down the street,” Hart said.

“Both schools were always so good in football and basketball,” he said. “Both schools had excellent athletes and coaches. You had bragging rights for a whole year if you won that game.”

“Once I got into the teaching field, I began to enjoy it and I decided to be a teacher,” he said.

“Basically it was about working with kids and helping them grow into young men the community would be proud of,” Hart said.

“Seeing them develop was my enjoyment,” said Hart, speaking about teaching and coaching equally.

Hart taught in Norfolk after his tenure at John F. Kennedy, teaching for 33 years in all. He served on Suffolk City Council for 16 years while teaching.

Hart’s father started Metropolitan Church Federal Credit Union in 1949 and he assisted his father for many years before becoming the president and CEO of the credit union 13 years ago.

The Hall of Fame ceremonies were over three days in Greensboro, N.C. culminating with being introduced prior to the Aggie football game versus Winston-Salem State.

“It was a tremendous honor to have been selected. It’s something I’ll never forget,” Hart said.

Hart became a regular starter in his sophomore season and led the Aggies in scoring that season.

He earned the MVP award in the 1964 game between the Aggies and North Carolina Central, was named N.C. A&T’s Outstanding Athlete for ’64, his senior year, and was presented the ’64 Philadelphia Alumni Award for his all-around performance on the gridiron.

JMU defender scores for Dukes, too