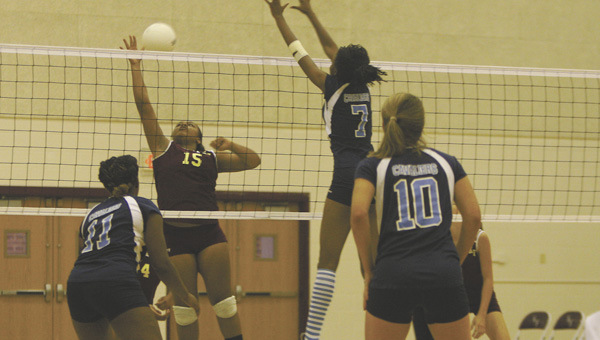 King’s Fork’s girls volleyball squad moved to a winning record on the season and Lakeland’s boys volleyball team improved on its chances for a Southeastern District Tournament spot Tuesday in cross-city volleyball matches at King’s Fork.

Both the Lady Bulldogs and Cavaliers completed season sweeps over their respective rivals.

The matches were the start of the second rotation through the Southeastern District for all four squads.

In the Cavs’ case, the win kept them in fifth place and, pending the outcome of other matches Tuesday night in Suffolk and Chesapeake, probably one game behind all-important fourth place. The top four teams reach the district tournament.

Including Tuesday’s match at King’s Fork, Cavalier head coach Daniel Waller said, “we probably have to win seven of our last nine matches to make (the tournament).”

Despite the straight-set win, Waller was looking for improvement on sloppy play.

“If we play like we did tonight, we’ll get our hats handed to us,” Waller said.

The Lady Bulldogs got out to leads in all four sets against Lakeland (0-10). In the opening game, KF, mostly on a serving run by Jamika Townsend, got out to a 7-1 lead. Townsend went on to lead the Lady Bulldogs with 12 assists, four kills and four aces.

After an easy win by KF to open the match, the second set was closer, but KF still led 13-8 before a 9-0 Lady Cavalier run on Crystal Treat’s serve.

Tashah Woodus played well in spurts at the center of the net for Lakeland. A block and kill by Woodus on back-to-back points pushed Lakeland’s lead to 20-14, and Lakeland kept rolling to what turned into a lopsided set by the end.

Lakeland and KF traded the lead in the third set before KF went on a 7-1 run midway through the set to go up 18-14.

The Lady Bulldogs, with two kills by Megan Blythe, two aces by Whitney Nichols and a block and a kill by Crystal Collins, scored six straight points to finish the set.

The final set was all Lady Bulldogs. KF jumped out to a 12-5 lead and led by as much as 20-8 before a big Lakeland rally made the final score close.

Treat had 12 assists for the Lady Cavs. Woodus had six kills and four blocks.

For KF, Nichols was the leading hitter with 10 kills. Blythe added six kills. Collins had four kills and four blocks. The Lady Bulldogs have five wins from their last seven matches.

Nansemond-Suffolk’s Chris Sharrett moves in on the StoneBridge penalty box Tuesday afternoon at NSA. Sharrett had a goal and two... read more