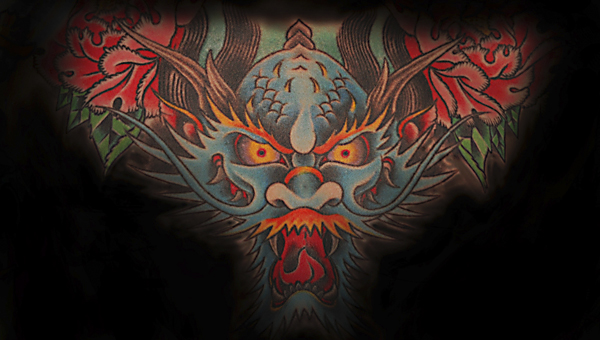 The Arts Center @ 319 in downtown Smithfield currently features photographs of tattoos, like this one of a dragon, and the art that inspired those tattoos in “Inked: Art on a Living Canvas” in its galleries through Oct. 31.

The line between tattoos and art, to some people, is as wide as the Grand Canyon.

To others, however, it might be as thin as a needle. And for still others, there’s no question it belongs in the genre of art.

To those who might question the artistic character of tattoos, “I would say they don’t know what art is,” said Richmond tattoo artist Brandon Saunders, who owns Saunders Custom Tattoos.

The Arts Center @ 319 in downtown Smithfield apparently thinks the same way. It currently features “Inked: Art on a Living Canvas” in its galleries through Oct. 31.

The exhibit includes photographs of tattoos on the living canvases of more than 15 people, from public school teachers to auto mechanics to scientists. Many of the tattoos were done by Saunders.

The exhibit also features artwork that inspired the tattoos, including original paintings, drawings and a sculpture. In addition, Smithfield freelance artist James Thomas Jr. wrote explanatory vignettes about each of the “canvases,” including the stories behind the tattoos.

Lee Poe, a freelance photographer who lives in Smithfield, photographed the tattoos for the exhibit. Primarily a portrait and wedding photographer, it was a step outside the norm for him.

“I’ve never photographed a tattoo,” he said. “I don’t have one and don’t plan to get one.”

Still, Poe said his work on the exhibit was “enlightening,” and that he met a lot of interesting people through the work.

“I don’t know much about tattoos, but I know about art,” he said.

Poe also pointed to Thomas’ vignettes as an integral part of the exhibit.

“The tattoo art as presented by Lee’s images is truly impressive,” said Sheila Gwaltney, director of the Arts Center @ 319. “The additional insight that James relates on the motivations and meanings of the efforts makes for a very compelling exhibit.”

Saunders, 37, has been tattooing since he was in his 20s. Body art fascinated him as a child, and he eventually knew he would be a tattoo artist.

His work is now recognized regionally, thanks to his distinctive style that has evolved over the years.

“People, a lot of times, just say, ‘I want a skull done in your style,’” said Saunders, who admits his body is nearly covered in tattoos.

Saunders pointed to one of his works, a full-back tattoo of a koi fish on a woman, as one that was the most rewarding.

“That’s probably the one that I’m really proud of,” he said, noting that it took nearly two years of monthly appointments to complete. “I worked very hard on it, but I’m proud to display all of them.”

A lesser-known reward of the tattoo business is the relationships artists can develop with their clients, he added.

“One of the aspects I didn’t really think about as I was getting into tattooing is the great relationships that I’ve built through tattooing my clients,” he said. “It’s a pleasing aspect of this business.”