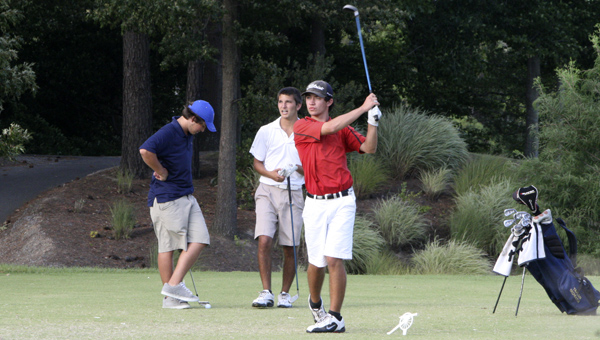 Nansemond River junior Travis Johnson, here in a match earlier this season, won the individual title of the Southeastern District Golf Tournament shooting 69, 3-under par, Tuesday at Sleepy Hole Golf Course. Wednesday’s round was rained out and Tuesday’s first round counted as the final results. The Warriors finished tied for second with Western Branch with a 320 total to earn a team berth into the Eastern Region Tournament.

Johnson, a junior and the Warriors’ top-seeded golfer, shot 3-under 69 with four birdies and a bogey to win medalist honors by three shots.

From preseason practices on, the Warriors and head coach Craig Stephenson said being one of the three Southeastern District schools to reach regionals was the main goal.

In the regular season, NR and Western Branch tied, both in district record and in their regular-season meeting. In a tiebreaker match at Nansemond River Golf Club, the Bruins edged the Warriors by three shots.

Tuesday at Sleepy Hole, Nansemond River tied again with Western Branch, at a 320 total and as runners-up behind Great Bridge at 312.

Wednesday’s second round was barely underway before it was rained out. The results from the first round became the final results.

In this case, the tie was perfect for the Warriors and it gave them the third and final berth, along with Great Bridge and Western Branch, into the Eastern Region Tournament. Grassfield finished fourth, nine strokes behind the Bruins and Warriors.