Saints, Bulldogs still on for tonight 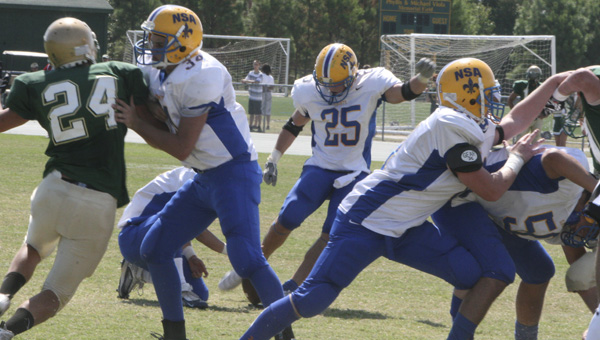 The Bulldogs played a wild, but in the end, heartbreaking, game last Friday, losing 20-19 to Indian River.

King’s Fork executed and played a smart game on both sides of the ball for three-and-a-half quarters and held a 13-0 lead.

The Braves scored three straight touchdowns in a six-minute span. KF rallied in the dying seconds with a hook-and-lateral for a big gain and Matt Hommell passing to Joseph Hill for a 25-yard touchdown as the clock expired. Indian River saved the one-point win by stuffing a Bulldog running play on the two-point try.

KF faces much tougher tests for at least the next two weeks with Grassfield next on the slate.

Last season at this point, NSA was 2-2 after a loss against Bishop Sullivan Catholic. NSA traveled to Lynchburg and beat Va. Episcopal 38-14. That was the start of a 7-1 finish to the Saint season, ending with the state title.

Bishop Sullivan hurt the Saints with big plays through the air and on special teams. The Bishops are normally sport a very good passing attack.

The Bishops come in off a 16-10 loss to North Cross. In VES’s lone win, over Carlisle, senior quarterback Daniel Alexander was 10-for-13 passing for 202 yards.

Western Branch’s 0-3 record heading into last Friday night’s game against Nansemond River was deceiving as the Bruins lost barnburners to Grassfield and Great Bridge. The only loss so far this season between the Grizzlies and Wildcats was Oscar Smith, No. 2 in the state in the season’s first Associated Press poll, beating Grassfield last week.

The Bruins routed the Warriors 47-0 and put up 367 rushing yards without a back reaching 100 yards individually.

The Cavaliers beat Western Branch for the first time in series history last season, with a 14-7 result.

A hard day on the Hill