From servant to served 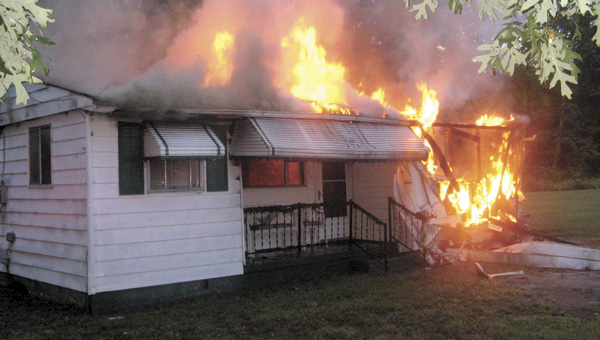 This fire at Betty Knight’s house on Airport Road destroyed nearly everything she had. The community is helping by collecting monetary donations to give to Knight.

People in the ministry get used to serving others in the midst of great need. Usually, however, that great need isn’t their own.

Pastor Betty Knight has been learning a bit about both service under pressure and being served by others this week.

She was in California when her home burned down on Monday.

Knight, the pastor of Heaven on Earth Ministries and the executive director of King’s Kids of America, was on ministry business when her daughter called with the news.

“My daughter told me that my house had burned down,” she said matter-of-factly on Friday.

Emergency crews were called to the Airport Road fire just before 7 a.m. on Monday. They brought it under control within 25 minutes of arrival, but Knight lost almost everything.

“I was able to save some paperwork that was in some boxes,” she said.

Despite the near-total loss, however, Knight is thankful nobody was home at the time.

“At that time of the morning, I’m sure I would have been in bed,” she said. “I thank God that I wasn’t there.”

Besides leading her church, Knight spends countless hours administering the King’s Kids program, which mentors local children. Once a year, the program gives out free bicycles to a boy and a girl from each of the program’s seven sites. This year’s event was only a few days before Knight left for California.

“She’s been volunteering with King’s Kids for 21 years,” Knight’s daughter, Sharonda Lewis, said. “She’s always looked out for the children and made sure they go on field trips and things they may not have been able to do.”

Her mother continually advocates for the children of the community, Lewis added.

“She makes sure a boy and a girl from each site wins a bike,” she said, recalling last month’s event with bounce houses, cotton candy, popcorn and snow cones. “She arranged all that for the kids.”

The church, Heaven on Earth Ministries, is accepting donations for Knight. Checks should be made payable to Betty M. Knight and mailed to 510 E. Pinner St., Suffolk, VA 23434.

Around the world in 11 months