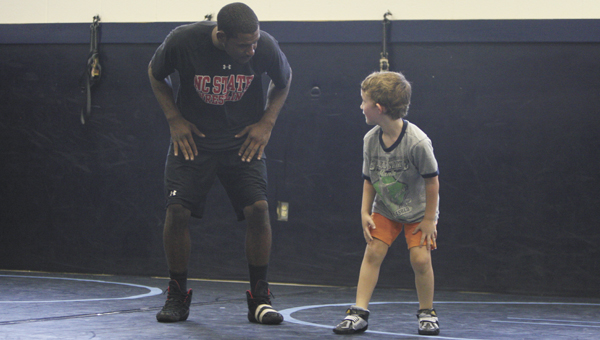 Bostwick would be just fine, too, if some kids just watched the action from the stands in Lakeland’s gym.

In the tournament’s inaugural run, it was for elementary-school and middle-school-age wrestlers. Bostwick’s expanded this year’s tournament to include those in high school, as well, partly because high school wrestlers can use the event as a preseason warm-up.

Another part of Bostwick’s idea, however, is looking longer down the road. Including high school athletes means there could be a few more younger siblings hanging around during the tournament.

“We want to get kids exposed, interested and into wrestling. If they see kids their age out there on the mat, hopefully some of them will gain interest. Hopefully, they’ll want to participate and it’ll help build up our wrestling club here,” Bostwick said.

The club and the tournament are all about participation. For high school wrestlers, many of them have been lifting weights, going to camps and working on their craft throughout the offseason. This tournament, a bit more than a month before the regular season starts, is a chance to test new moves, see what life in a new weight class might be like or face opponents before seeing them when matches really count.

For younger athletes, any tournament around the region means valuable experience. It’s a chance to put lots of practice time with a club into competition.

“We’re hoping with elementary-school through high-school-age kids to have a good 20 or so local kids participating,” Bostwick said.

The event comes at a good spot on the calendar for newcomers who might want to test the sport out. The youth season, like the high school schedule, gets going at full speed in December.

The Cavalier Youth Wrestling Club is holding practices right now. Even if a rookie came out for three or four weeks of practicing before Oct. 30, entering the tournament would be a good ice-breaker to live competition, said Bostwick.

Even the format of the one-day tournament is designed to maximize how much action each wrestler gets.

The Madison System will be used for weight classes. Unlike a high school meet or tournament, with set classes, the wrestlers in each age group will be clustered by weight.

Instead of having some large weight classes and others where a wrestler might get only one or two matches for the day, every competitor should have a full day.

The elementary school groups, with kids as young as a kindergarten/first grade age group, are set to start at 8:30 a.m. Middle school and high school wrestlers will start later in the morning.

“This year, with the high school group added, hopefully most of my guys will be in it and probably a lot of Nansemond River and King’s Fork,” Bostwick said.